Intu Properties, owner of Manchester’s Trafford Centre and Lakeside in Essex, has failed to reach a debt standstill deal with its creditors 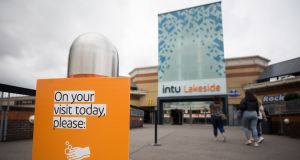 Information boards for hand washing stand at the entrance as customers enter the Lakeside shopping centre.

Intu Properties, the owner of Manchester’s Trafford Centre and Lakeside in Essex, said on Friday it was headed into administration after failing to reach a debt standstill deal with its creditors.

Intu, which has KPMG as a stand-by administrator, had warned earlier this week that it may have to close some of its malls if it fails to get funding. It employs around 2,600 people in several shopping centres across Britain and Spain.

Retailers were forced to shut stores for nearly three months due to the British government-imposed coronavirus lockdown, pushing some of them into administration, while others slashed costs and struggled to keep up with their rent payments.

The company, which began talks with creditors in May, had said on Tuesday the main sticking points of the debt talks were the duration of a standstill, how much creditors would share in any future recovery and funding.

“Unfortunately, insufficient alignment and agreement has been achieved on such terms,” it said in a statement. The debt waiver it secured in early-May expired on Friday.