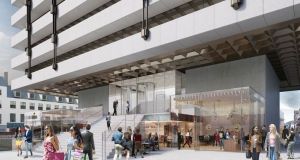 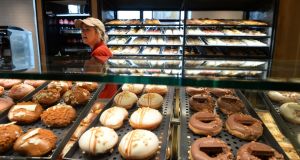 Still relatively fresh from the huge success of its first Irish store at the Blanchardstown Centre, Krispy Kreme is gearing up to open the doors on its second doughnut outlet in the capital.

The fast food giant, with its headquarters in the US, has agreed a deal for a “fully glazed unit” at Central Plaza on Dame Street in Dublin city centre, and will open for business there early next year.

Krispy Kreme will occupy one of the highest-profile units at the former Central Bank headquarters following the completion of its redevelopment by Hines and the Peterson Group. Extending to 234sq m (2,519sq ft) at plaza level with an additional 89sq m (958sq ft) below plaza level, the doughnut outlet’s new premises will be glazed throughout and front on to both Dame Street and the walkway linking Dame Street to Temple Bar.

The store’s full-glass facade will allow customers and those passing by to see the production of its doughnuts from outside.

Krispy Kreme has proven to be extremely popular with Irish customers since arriving here in 2018. After being met with a queue of 300 customers at the 7am opening of its first store on September 26th, 2018, the company’s Blanchardstown outlet went on to become its best performer worldwide within its first year of operation, earning average weekly revenues of almost €300,000.

Commenting on Krispy Kreme’s decision to locate at Central Plaza, Brian Moran, senior managing director of the scheme’s developer, Hines, said: “Krispy Kreme will bring an exciting and beloved retail experience to a whole new customer base and will be perfectly located in the heart of Dublin.”

As the redevelopment of the former Central Bank headquarters nears completion, passersby are getting a first glimpse of the changes that have been made by Hines and the Peterson Group.

The restoration of the now-renamed Central Plaza’s interior is almost complete and will feature a 6m high entrance lobby and a 15m wide glazed facade with double-height revolving doors, accessible via a grand staircase from the main plaza.

The eight floors of office space in the development, which is already leased to WeWork and Amtrust Financial, will house about 1,300 office workers. In total there will be upward of 1,500 workers on-site.

Mervyn Ellis from BNP Paribas Real Estate acting as the main leasing agent on behalf of Hines and Peterson Group said there has been considerable interest in the Central Bank redevelopment project.

“Central Plaza is proving a major draw for marquee tenants and we’re extremely  pleased with the progress so far. The objective at the outset of the marketing campaign was to secure a mix of operators that would complement each other and provide a mix of food and beverage brands for all.  With BuJo, Ginos, Las Iguanas and now Krispy Kreme secured there is something for everyone. These street-level venues really will transform and enliven this part of Dame Street and College Green”