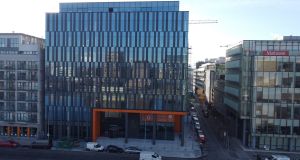 Rabobank is to commence the fit-out of it new Dublin office following an agreement to take 23,500sq ft (2,183sq m) of space at 76 Sir John Rogerson’s Quay in the city’s south docklands.

It is understood the Dutch-headquartered bank has agreed to pay a rent of around €57 per sq ft to occupy the sixth, seventh and eighth floors of the building on a 10-year lease with an option to renew for a further 10 years.

The building has a double height entrance hall, four elevators and two stairs serving all floors. There is secure bicycle parking, staff lockers, drying rooms and shower facilities at basement level, and a new “pocket park” to the rear of the building, which offers a bright sheltered meeting place for workers and residents of the adjacent Benson Building.