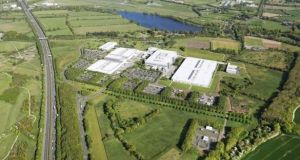 Developer Michael O’Flynn and BlackRock Real Estate Assets look set to double their money with the sale of the former Hewlett Packard (HP) campus in Leixlip, Co Kildare, to a Swiss-based investor.

Having paid € 51 million to acquire the 195-acre scheme in September 2018, BlackRock and the O’Flynn Group are understood to have agreed a deal to sell the campus to Geneva-based Stoneweg for about €100 million. Stoneweg is understood to have emerged as the preferred bidder for the scheme following a targeted marketing process run by Eastdil Secured.

The sale of the Liffey Park Business Campus, as it is now known, represents a significant coup for BlackRock and O’Flynn, coming as it does less than one year after the partners secured € 172 million from German investor DWS for the 966-bed Point Campus student accommodation complex in the Dublin docklands.

At the time of its sale to BlackRock Real Estate Assets and the O’Flynn Group, some 600,000sq ft of the existing built stock was vacant, while 70 areas of surplus development land remained available for development. It is understood this land could potentially accommodate about 700,000-800,000sq ft of new development.

It is understood Mr O’Flynn and his US partners invested in the rebranding and management of the former Hewlett Packard campus over the past two years, but the costs incurred pale alongside the returns they are set to see from its expected sale to Stoneweg.

Stoneweg, established in 2015, is a real estate investor with headquarters in Geneva and offices in Spain, Italy, Andorra, the US and Ireland. The company’s plans for Liffey Park Business Campus are not known at this point, but its purchase of a former Coca Cola plant in the suburbs of Madrid in September could provide a useful indicator of the direction it might take.

Commenting at the time of the Spanish acquisition, Stoneweg founding partner and chief executive Jaume Sabater confirmed his company’s intention to redevelop the plant as a logistics park.

In remarks that could apply equally to the Irish market, Mr Sabater noted in his comments how the recent experience of the Covid-19 pandemic had “accelerated pre-existing ecommerce trends”.

9 Why UK supermarkets are not making super profits