State’s biggest landlord to pay €424,000 per unit for 25 apartments at Beechwood Court 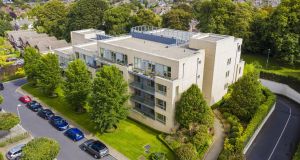 The Atrium forms part of the Beechwood Court scheme developed by Jackson Homes in 2006.

Ires Reit is closing in on the purchase of a portfolio of 25 high-end apartments in the south Dublin suburb of Stillorgan.

The State’s biggest landlord is understood to be engaged in exclusive talks in relation to the acquisition of the units at the Atrium in Beechwood Court for about €10.6 million. Should the deal proceed at that level, it would represent an average of €424,000 per unit, and a premium of 9 per cent on the €9.7 million price agent CBRE had been guiding when it brought the portfolio to the market in September.

Ires Reit’s expected purchase of the Atrium apartments will bring its overall holding at Beechwood Court to 126 units. In 2019, the company paid €43,584,000, or an average of €431,574 per unit, for 101 units at the Stillorgan scheme. That transaction formed part of Ires Reit’s €285 million purchase of 815 apartments and houses distributed across Dublin and Cork from New York-headquartered Marathon Asset Management. The sale of the so-called XVI portfolio remains the largest single acquisition of buy-to-let properties to have taken place in the Irish market.

Ires Reit’s purchase of the Atrium portfolio, meanwhile, is likely to be funded from the €48 million it generated from its recent sale of 151 “non-core” Dublin residential units to a fund managed by Dutch-headquartered investor Orange Capital Partners.

The Atrium portfolio comprises 24 two-bedroom units and one three-bedroom unit, along with 25 car-parking spaces at basement level. Eight of the apartments have been held vacant while the remaining 17 units are being sold with the existing tenants in place. The portfolio is being sold by CBRE on the instruction of statutory receiver George Maloney of RSM Ireland.

Developed originally by the late Bryan Cullen’s Jackson Homes in 2006, the Atrium and wider Beechwood Scheme occupies a prime location along the N11 approximately 1km from Stillorgan village and 8km from St Stephen’s Green in Dublin city centre. The development enjoys easy access to the city and beyond thanks to its position on the N11 quality bus corridor, and its close proximity to the M50 and M11 motorways, and the Luas Green line stops at Sandyford and Stillorgan.

Beechwood Court has proven to be popular as a rental location with employees of the major corporates based in the nearby Sandyford Business District. Google, Microsoft, Facebook, Mastercard and Vodafone are among those with offices in the area.