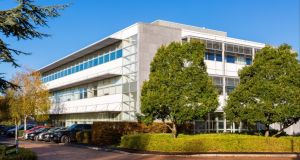 The prospect of a net initial yield of 6 per cent is expected to generate significant interest from investors in the sale of a fully let office block at Dublin’s East Point Business Park.

Agent Lisney is seeking offers in the region of €8.95 million for Block G, a three-storey extending to a gross internal area of 2,460sq m (26,510 sq ft) with a parking provision of 49 surface car parking spaces.

The building, acquired by Irish real estate owner and operator Fine Grain Property for €4.95 million in 2015, has been actively managed since and comes to the market 100 per cent occupied and let on a floor-by-floor basis to two tenants: gaming company Activision Blizzard and well-known polling firm Red C.

Activision Blizzard, for its part, occupies two floors having only recently agreed to renew its long-standing lease for the second floor of the property while also agreeing to take the entire ground floor. Red C continues to occupy the third floor of the building. Taken together, the two tenancies are set to deliver a contracted rental income from May 2021 of €590,352 per annum.

While the building’s current owners have sought to maximise its rental income, the property offers the prospective buyer scope for both asset management and development in the short to medium term.

According to the selling agents, Block G’s 0.75-acre plot could potentially accommodate a refurbishment or development that would more than double the size of the existing property to 60,000sq ft, subject to planning permission.

East Point Business Park is one of Ireland’s largest and most successful business park schemes, with more than 1.25 million square feet of office space. The scheme is home to a wide range of global tech occupiers including Oracle, Google, Cisco, Verizon, Fineos and Activision Blizzard, earning it the moniker “the Gateway to Dublin’s Silicon Docks”. Outside of its tech tenant line-up, East Point’s blue chip occupiers also include Deutsche Bank, Virgin Media, British Airways and Enterprise Ireland.

Quite apart from its accessibility, the scheme’s 40-acre landscaped waterside setting, tennis courts, and five-a-side soccer pitch are frequently cited by occupiers as key factors in attracting talent.