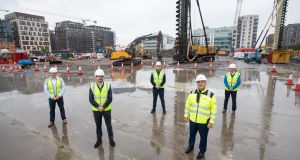 Developer Johnny Ronan’s Ronan Group Real Estate (RGRE) has commenced construction on one of its most ambitious schemes to date in Dublin’s docklands.

Located on 4.6 acres next to the 3 Arena, the Waterfront South Central scheme will, upon completion, comprise hundreds of apartments set within what RGRE describes as a “high-rise, garden village at the heart of Dublin’s new riverfront district”.

Although Ronan already has planning permission for 420 apartments and 300,216sq ft (27,891sq m) of offices on the site, he is now aiming to increase that number to 1,000 residential units distributed across two towers rising in height to 40 and 44 storeys respectively.

At 155m, the taller of these blocks would be Dublin’s tallest building, and nearly three times the height of Liberty Hall (59.4m), and nearly twice the height of the 88m (23-storey) tower on Tara Street for which the developer secured planning permission last year.

While RGRE’s revised proposal is currently the subject of an application to An Bord Pleanála under the Strategic Housing Development (SHD) process, the enabling works for the scheme are already underway. The contract for this part of the project has been awarded to Roadbridge, who worked with Ronan on the development of the Ritz-Carlton Hotel in Co Wicklow.

RGRE and its funding partners, Colony Capital, acquired the Waterfront South Central site for €180 million in 2018.

Commenting on the commencement of its development, RGRE chief executive Rory Williams said: “The core of RGRE and Colony’s partnership is a vision for modern living and working spaces that are built to meet and exceed the demands of the world’s most dynamic and forward-thinking occupiers.

“In line with these themes, and in working closely with the IDA, Waterfront South Central is specifically designed to respond both to Dublin’s immediate and future needs and to lead the way for the city’s development.”

Outside of their partnership at Waterfront South Central, RGRE and Colony are involved together in the delivery of new European headquarter campuses for both Facebook and Salesforce.

As The Irish Times reported recently, RGRE and Colony have appointed Eastdil Secured to lead the search for a new long-term financing partner for their joint ventures on Fibonacci Square (Facebook HQ) and Spencer Place (Salesforce HQ), which will see RGRE and Colony retain an ownership stake in both buildings. It is expected that the incoming funding partner will also fund further planned acquisitions.

Last year, RGRE began the process of refinancing portions of its investment portfolio, separate from its development pipeline. Advisers have been appointed with “ multiple expressions of interest” said to have been received.

1 Three Ireland switches on 5G network around the country
2 Harry Crosbie puts family haulage business into liquidation after port dispute
3 Harry Crosbie failed to disclose assets, Nama tells court
4 Am I paying too much for my buy-to-let mortgage?
5 State ‘should bail out’ distressed homeowners
6 Pilita Clark: The looming legal minefield of working from home
7 Should I switch bank now with Ulster Bank at risk of closing?
8 The wealth of the Irish – how do your assets match up?
9 Argento founder Peter Boyle is streets ahead of the past
10 Mortgage breaks will not be extended beyond this week
Real news has value SUBSCRIBE