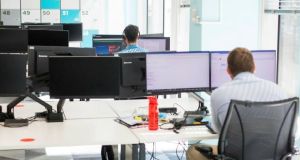 Office owners are facing millions of pounds of extra costs as they make workplaces ‘pandemic-proof’, in the hope that white-collar employees can be lured back from their homes.

New health measures such as touchless entry systems and desk dividers are being introduced with the aim of minimising the spread of infection and reassuring staff, many of whom are concerned that sitting in a communal office will never be as safe as working from home.

But implementing these precautions will come at a substantial cost according to Liviu Tudor, president of the European Property Federation and chairman of Genesis, which owns a €500 million office portfolio in Romania whose tenants include Siemens, Société Générale and Accenture.

“For us the total cost is similar to going green: 1 to 2 per cent of total initial investment. But it’s about making the workplace trustable,” he said. “My feeling is landlords will do that.”

Genesis has drawn up a detailed list of about 100 safety measures which it hopes will become the industry standard, in a similar manner to environmental or fire safety requirements for buildings, and which are endorsed by the EPF.

They estimate that for a building which cost €20 million to build, landlords could expect to pay €400,000 to implement the full range of measures.

The UK government has published its own guidance on what employers and office owners should be doing to make workplaces safe, recommending thorough risk assessments and that staff keep 2 metres apart.

Genesis’ criteria run from simple measures such as introducing temperature scanners in lobbies to costlier steps such as repainting surfaces with antimicrobial paint, creating a dedicated ‘quarantine’ room and employing stewards to ensure measures are being upheld.

The standard, insisted Mr Tudor, would not “make offices into hospitals”.

Landlords who sign up can achieve three levels of certification, the most rigorous of which Genesis is currently implementing across its own estate at a cost of close to €10 million according to Mr Tudor. He added that the group is speaking to a number of other landlords in Europe and the US about adopting the standard.

For the largest landlords, implementing the full range of measures would be a significant burden. British Land has an estate valued at more than £11 billion, the bulk of it offices, including the Broadgate estate in east London and a chunk of the Paddington district to the west. Making its estate compliant with Genesis’ guidelines could rack up a bill of tens or even hundreds of millions of pounds.

The FTSE 100 group has not signed up to Genesis’ standard although it has introduced measures to make its estate safer. Plexiglass screens have been installed in some offices and ‘touchpoints’ for staff have been reduced to a bare minimum. The costs have so far run to several hundred thousand pounds, according to the company. In its latest results, for the year to March, British Land reported a pre-tax loss of £1.1 billion.

Canary Wharf Group, owner of the east London business district, has spent just over £250,000 on making one office for around 500 of its own staff secure. The group has introduced a one-way system in busier parts of the estate, cut the maximum number of people per lift to four and divided desks so that no two people are sat next to or opposite one another.

“Improved delivery of fresh air - people will demand that. It might cost landlords a year’s worth of rent to make adaptations to provide it, a significant amount of money,” said Chris Lewis, a director at Devono Cresa, which advises office tenants. “But it’s that or risk having a building that’s obsolete.”