Hotel Chocolat to set up its sweet business in Dublin 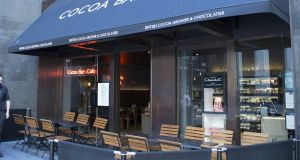 Hotel Chocolat in Liverpool: The boutique chocolatier intends to open its latest shop in Dublin by the end of 2017.

The UK chocolatier Hotel Chocolat is to open a new store in the GPO retail building on Dublin’s Henry Street. A second store will be launched at Dundrum Town Centre while a third is being considered for Blanchardstown Town Centre.

Mervyn Ellis of BNP Paribas Real Estate had been quoting a rent of €175,000 for the GPO store, which has a ground floor area of 60sq m (646sq ft) and a further 112sq m in the basement as well as at street level. The premises is owned by an Irish pension fund and was previously occupied by Barrett Shoes.

Hotel Chocolat was founded in 1993. After trading online for years, it opened its first shop in north London in 2004. It now has 95 boutique outlets and plans to open the Henry Street store before the end of the year.

One of the best-known tourist venues on the Ring of Kerry, the Bianconi Inn in Killorglin, will be offered for sale on behalf of owners Ray and Rick Sheehy, who are retiring after a lifetime of dedicated service to the hospitality sector.

John Ryan of CBRE is seeking offers in excess of €1.25 million for the highly successful three-storey business, which includes a ground-floor licensed premises, separate restaurant and 16 bedrooms.

The Sheehy family have continuously upgraded and expanded the Bianconi Inn since acquiring it in 1955, and are expecting considerable interest in what is a “very profitable” business.

Killorglin is one of Kerry’s principal towns, attracting a continuous stream of tourists and considerably more during the Puck Fair festival every August. Several international companies are based there, including the Fexco, the payment solutions company, as well as pharmaceutical firms Temmlar and Astellas.