Plans for €75m makeover of Central Bank building to be lodged 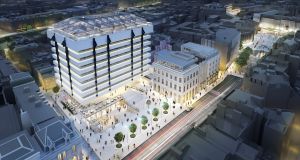 *US property giant Hines and its Hong Kong partner Peterson will this week seek permission for a €75 million redevelopment of the old Central Bank headquarters in Dublin.

The plans for the building on Dame Street in the capital’s centre which the two groups bought this year, include a 300-seat rooftop restaurant and 12,000sq m of offices as well as shops in the adjoining buildings, which they also own.

They are applying to Dublin City Council for permission for the work, which it is understood will cost about €75 million. The developers hope to have it finished in time for Christmas 2018, tying the redevelopment in with the pedestrianisation of nearby College Green, which is due to be completed around the same time.

Hines’s and Peterson’s plans involve altering the roof of the existing building to accommodate the restaurant and a viewing area overlooking the city centre.

Original architect Sam Stephenson was forced to redraw his plans when it emerged that they exceeded the height laid down in the original planning permission granted for the building in the 1970s.

The change in his plans left the structure’s steel frame exposed at the top of the building. This was subsequently covered with the copper cladding that can be seen today. Its new owners plan to replace this with a two-storey glass-roofed structure that will house the restaurant, hospitality and viewing areas.

Tom Gray, an Irish architect based in Paris, worked on this part of the redevelopment. Dublin architects, Henry J Lyons, are responsible for the overall project. John Paul Construction is the main contractor. The builder is currently refurbishing the existing offices and restoring the building’s granite cladding and steel supports, work that does not require planning permission.

Hines and Peterson are hoping to attract a restaurateur with experience of operating similar businesses in other European cities to run the eatery that will sit on top of the Dame Street building. Diners will enter the restaurant via a lift at the building’s base, while the offices will be accessed via the existing entrance.

The plans also provide for cafés around the building’s base and the extension of the front plaza by removing railings erected there in 1998.

The application is part of a master plan, dubbed Central Plaza, that includes the annex and commercial buildings on Dame Street and numbers 6-9 College Green.

This part of the plan will be mainly retail. The developers hope that the pedestrianisation of the area will draw shoppers and high-street chains to College Green.

Brian Moran, senior managing director of Hines Ireland, said the proposal involved a significant investment by his company and Peterson.

“Our application will include an exciting mix of retail shopping, cafés and restaurants at street and plaza level and in a newly created lower plaza area,” he said.

Hines is a privately-owned real estate investor with operations in 189 cities in 20 countries. It manages about $96.5 billion worth of assets and is currently working on 114 different projects.

It is leading the development of a new centre that includes houses, shops and offices in Cherrywood in south Dublin.

The family-owned Peterson Group, set up in 1959 by Yeung Pui Kam in Hong Kong to trade embroidered fabrics, has assets of more than $1.1 billion

With Hines, it paid a reported €67 million for the Central Bank buildings on Dame Street. The financial regulator recently moved to new offices on North Wall Quay.

* This story was edited on August 9th