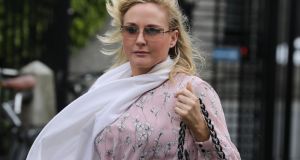 The wife and son of property developer Sean Dunne are seeking to draw the National Asset Management Agency (Nama) and Ulster Bank into the legal battle with the official overseeing his US bankruptcy.

Gayle Killilea, the former newspaper gossip columnist, and Mr Dunne’s son from his first marriage, John Dunne, along with three of their companies, have asked a US court for permission to seek discovery of documents from the State loans agency and Ulster Bank, Mr Dunne’s two biggest creditors.

The legal manoeuvre is the latest in the Co Carlow developer’s long-running proceedings before the US bankruptcy courts. It follows a ruling by the Connecticut bankruptcy court last week finding the boom-time builder in contempt for failing to produce emails from two Gmail accounts he held in recent years.

Ms Killilea and Mr Dunne jnr have argued in a new filing to the Connecticut bankruptcy court that Nama and Ulster Bank have “actively and extensively participated” in the legal action taken by Mr Dunne’s bankruptcy trustee Rich Coan to reverse multimillion euro asset transfers to his wife.

They have said that, despite the “extensive participation” by Nama and Ulster Bank in the action and their co-operation, co-ordination and sharing of discovery with the trustee, each institution has refused to accept their requests for discovery concerning Mr Dunne’s finances in the run-up to the property crash.

To participate in Mr Dunne’s bankruptcy proceedings and support the trustee’s legal action while simultaneously claiming to be “immune” from discovery is “unfair” and undermines their defence, they say.

Ms Killilea and Mr Dunne jnr claim that Nama and Ulster Bank possess information that is “highly relevant and important” to their defences as they claim that the two institutions have information showing that Sean Dunne was solvent at the time the “alleged transfers” took place with Ms Killilea.

Mr Coan claims that the transfer of tens of millions of euro in assets, including “Walford”, the house on Shrewsbury Road in Dublin that Mr Dunne bought for €58 million in 2005, were fraudulent and should be reversed.

Ms Killilea and her fellow defendants claim that the total transfer of €100 million long predates the bankruptcy proceedings and took place at a time when Mr Dunne was financially solvent.

She argues in the latest filing that the developer testified in his bankruptcy proceedings that he transferred the assets under an agreement reached in 2005 and well before the four-year statutory period under Connecticut law during which a bankruptcy trustee can seek the reversal of transferred assets.

“The bulk of the assets (sic) transfers to Ms Killilea were accompanied more than four years before Sean Dunne’s bankruptcy filing,” the defendants said. “At the time of these transfers Sean Dunne was robustly solvent and worth a substantial fortune.”

These assets have become a significant part of Ms Killilea’s holdings, the defendants argue, and together with her own assets have helped her make other investments, including the purchase of US properties that the trustee is pursuing.

Mr Dunne filed for bankruptcy in the US in 2013 and was also made bankrupt in Ireland later that year on an application made by Ulster Bank which helped fund his ill-timed attempt to develop property in Ballsbridge as the market was turning.

The Irish High Court was told in May that Ms Killilea had legally separated from Mr Dunne.