Revenue in the company’s Irish division dropped ‘on lower volumes’ 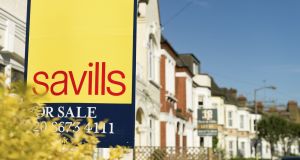 Savills have reported profit growth despite a post-Brexit decline in demand for new homes and office space in London. Photograph: iStock

International estate agency Savills reported a 27 per cent rise in first-half profit on strength from Asia and its real estate investment management arm, despite a post-Brexit decline in demand for new homes and office space in London.

However, in Ireland revenue decreased in the first six months “on lower volumes traded in the period.”

The company, which gets nearly two-thirds of its revenue from outside the UK, said underlying profit rose to £32.4 million ($42.05 million) for the six months to June 30th, from £25.5 million a year earlier.

Its shares were up 3.6 per cent in early trade.

The company said it expected full-year performance would be in line with expectations, although highlighting that it continued to trade in an “environment of ongoing political and economic uncertainty”.

It said the measures taken by the Hong Kong government to cool its property market were likely to impact volumes in the second half, while the British residential market continued to face uncertainty in the aftermath of the Brexit vote.

“In May 2017, the Hong Kong government implemented further cooling measures which are likely to have an impact on volumes in the second half of the year,” the company said in a statement.

Savills said income from residential transactions in Asia increased by 23 per cent to £20.1 million, driven by 84 per cent sales growth in Hong Kong.

Underlying profits from its British residential transaction business fell by 27 per cent to £5.4 million.

Overall, however, Savills’ UK business reported a 7 per cent rise in revenue as strength from its consultancy services offset the impact of reduced volumes in its residential business.

The UK housing market, which has slowed since the EU referendum, has been further hit by a rise in stamp duty charges and an uncertain outcome in the June national election.