Firm is building office space in Dublin for 60,000 people 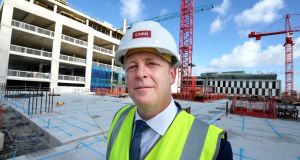 Cairn Homes has received bid interest from private rental companies for an apartment block it is building in Dublin’s docklands, as commercial landlords eye an opportunity to lease accommodation to financial firms seeking to move staff to Ireland from the UK under Brexit.

However, Cairn’s chief executive, Michael Stanley, told The Irish Times in an interview that the homebuilder has rebuffed such advances, as it remains focused on selling to individual buyers.

“We’ve had approaches from companies in the private rented sector looking to buy the entire scheme with a view to then leasing or renting out apartments to Brexit companies,” Mr Stanley, said of the complex of 122-unit complex at Six Hanover Quay. “However, it’s not our model. We build for home-buyers.”

He declined to identify the parties behind the approaches.

The overtures show how large asset purchasers are eyeing a chance to make money out an expected increase in financial services jobs in Dublin under Brexit, amid a shortage of residential accommodation in the capital.

Ireland’s largest private landlord, Irish Residential Properties Reit, reported on Wednesday that its profits surged 25 per cent in the first half of the year to €33.3 million, on the back of higher rents and a jump in the value of its properties.

Financial industry sources have said that many senior London-based bankers with firms planning to move operations to Dublin and other European Union cities – to maintain access to the single market after Brexit – will opt for weekly commutes, rather than set up permanent residence in Ireland.

“Across the [construction] industry, we’re currently building enough office space in the city centre for 60,000 people and residential accommodation for only 1,600 people,” said Mr Stanley, noting that investment costs are higher for apartments than houses before builders can make money, as the latter can be developed and sold in phases.

“If we really want to benefit from Brexit as a city, we need to encourage apartment building in the city centre.

“The way we must build to current apartment regulations – in terms of minimum size, dual aspect and with height restrictions – adds to costs,” he said. “There are numerous office buildings being developed today in Dublin which are heading up to 25 to 30 metres tall and we’ve got a 16-metre cap on residential buildings.”

Mr Stanley said that Cairn has “a big enquiry list” for Six Hanover Quay, where average apartments being built are well over 1,000 square feet (93sq m). They are the first in Dublin to be developed using a new sprinkler system that allows for more open-plan design.