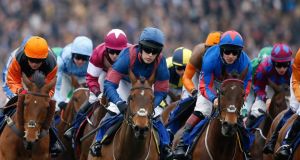 The next results from Paddy Power Betfair are due in February, when it will publish its 2017 full-year returns. Photograph: Alan Crowhurst/Getty Images

News that Mr Corcoran is planning to leave the industry-leading group he helped create through last year’s merger of Paddy Power and Betfair took markets and the sector itself by surprise this week.

Speaking after Paddy Power Betfair released results for the first half of 2017 on Tuesday, Mr Corcoran said that, having worked in sports betting for the last 16 years, this was the right time to go.

He said that he had yet to decide on his next move and would weigh “different sectors and even different geographies” before taking on any new role.

The shock created by the announcement of his departure knocked 5 per cent off the group’s share price. Independent board member and Worldpay UK chief executive Peter Jackson will succeed him.

Mr Corcoran made it clear that he waited until the board, led by chairman Gary McGann, had chosen his successor before announcing his intention to leave.

“The process could have taken another six months or it could have been done within weeks,” he said.

“I am really confident in the prospects for our group. They now have a really bright, high-energy guy with experience of regulated international markets to take over,” he said. “This is a good time to hand over the reins.”

Mr Corcoran is regarded as a pioneer of online betting. He led the development of Paddy Power’s original internet business in the early years of the century, playing a key role in growing the company into a multinational.

Betfair appointed him chief executive in 2012. And, after overseeing an improvement in its performance, he helped steer the merger of the two companies, with combined revenues of more than €1.5 billion a year, four years later.

When news of his departure broke, analysts questioned whether work on that merger was complete as both companies are continuing to integrate their technology and systems.

Mr Corcoran dismissed reports that the group had fallen behind with this work. “We’ve said that it would take us into quarter four and we are on track for that,” he said.

There was no official word on when he will leave and Mr Jackson will take up the reins. However, Mr Corcoran lent some credence to suggestions that it would happen towards the end of this year.

He told market analysts on a call on Tuesday morning that “it is possible that this will be the final time that I get to present Paddy Power Betfair results to you”.

The next results due from the group are in February, when it will publish its 2017 full-year returns.