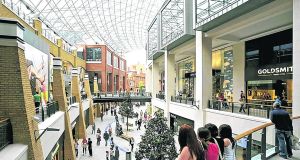 Victoria Square Shopping Centre in Belfast. Shopper footfall in the North fell in July by 2.3% on main shopping streets and by 1% in shopping centres

A lack of serious sunshine, overhanging Brexit clouds and persistent high inflation which has hit people’s spending power have made it a miserable summer for many retailers in the North. And the forecast is not likely to improve, industry experts are warning.

Sunny weather often loosens the purse strings during the summer months, according to Rachel Lund, head of insight and analytics at the British Retail Consortium (BRC) , but this year in Northern Ireland retailers have not only had to battle with spells of gloomy weather but also a more depressing political backdrop.

Latest research from the Northern Ireland Retail Consortium (a sister organisation of the BRC) shows there was a sharp drop in the number of people out shopping last month, whether in shopping centres, town-centre shopping streets or at retail parks compared to the same time last year.

A weak pound may still be attracting cross-Border shoppers with their stronger euro, delivering a welcome boost to retailers in key Border locations like Newry and Derry, but overall it was not enough to stem the fall in shopper footfall which the North suffered last month.

According to Ms Lund, there was a number of reasons for this, both from an economic and shopper perspective.

She said the general health of the economy always influences shopping patterns, but changes in the way people are shopping today is also a significant factor.

“Long-term there has been a decline in shopper footfall because of the growth of online shopping, and that in turn has made retailers rethink the economics of physical space – they still have flagship stores in key locations but less satellite stores than before. If you are shopping more online you are less like to visit the physical store as often as you have done in the past.

“But household budgets have also been impacted by increases in the overall cost of living. We’ve seen growth in sales of food but a drop in non-food sales, so that tells us that people are less happy to spend on what they may see as less essential items – such as the latest games console or trips to restaurants or leisure destinations,” Ms Lund said.

Northern Ireland Retail Consortium’s research shows shopper footfall in the North fell during July by 2.3 per cent on main shopping streets and by 1 per cent in shopping centres. Retail parks also suffered a 2.3 per cent decline in shopper numbers.

There was also a big fall-off in the number of people who went shopping after 5pm in July, which Ms Lund said illustrated a key different between Northern Ireland and the rest of the UK.

“Shopping is much more of a leisure activity because of the way people shop today than it has ever been, so for some retail destinations there is also a lot of emphasis on the leisure and how this attracts footfall,” she said.

In the UK last month in general there was a fall in evening footfall of 0.5 per cent, but in Northern Ireland the numbers of these particular shoppers slumped 6.2 per cent.

Separate research from Danske Bank helps to explain why there is less leisure shoppers out spending money in the North this summer.

According to Conor Lambe, Danske Bank economist, Northern Ireland is gripped by a consumer squeeze. Households are less confident and a lot less happy than they were at the beginning of the year about what their financial position might look like over the next 12 months.

“Factors such as Brexit-related uncertainty, which seems to have increased further following the general election, and the continued political impasse in Northern Ireland are also likely to have acted as a drag on confidence levels.”

The Northern Ireland Retail Consortium is concerned that this lack of consumer confidence will only make it more difficult for retailers to attract people to come and physically spend money in their stores.

The worry is that if things get worse it could force retailers to shut underperforming stores, which would lead to job losses.It points to figures for last month which showed one out of every seven retail premises in the North was empty.

In July the town-centre vacancy rate for Northern Ireland was 14.3 per cent, compared to a UK average of 9.6 per cent.

Criona Collins, head of retail at commercial property consultant Lambert Smith Hampton’s Northern Ireland operations, says one of the big challenges for retailers – large and small, whether they are based in rural towns or cities – is business rates.

“Rates are a huge cost to businesses, and are often unfair because they do not differentiate specific circumstances whether it is a small retailer in a rural town or a shopping centre tenant that is already paying service charges.

“Northern Ireland needs to be more imaginative in helping retailers and creating the right environment for retailers to grow and invest and create jobs, and also when it comes to the issue of vacant retail premises, particularly on the high street.

“One of our problems at the moment is that we do not have an Assembly to take the lead on this – we need to look at the changing nature of retail in Northern Ireland, and explore if these vacant premises could be used for other uses from GP surgeries to educational centres or other social hubs,” said Ms Collins.