Increase would see room total rise from 127 to 151 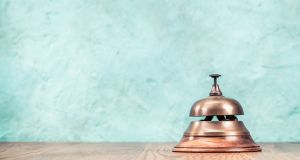 Abbey Cottages has lodged an appeal with An Bord Pleanála against the recent decision of Dublin City Council to reject the company’s application for revised plans for the hostel on Upper Abbey Street. Photograph: iStock

The developers of a large new hostel in Dublin city centre are to make a fresh bid to secure planning permission for an additional two floors.

Abbey Cottages has lodged an appeal with An Bord Pleanála against the recent decision of Dublin City Council to reject the company’s application for revised plans for the hostel on Upper Abbey Street.

The developers are seeking permission for a number of modifications to the original design to allow the construction of two new floors which would see the total number of rooms increase from 127 to 151 in an 11-storey building which would accommodate 634 guests.

However, council planners said the proposed increase in height of the hostel would detract from the character of the existing streetscape given the scale and height of the original design for which planning permission was granted.

“The proposed increase would result in the development appearing overbearing and monolithic when viewed from Abbey Cottages,” the council said.

It claimed the additional floors did not make “a positive contribution to the urban neighbourhood and streetscape.”

It also took issue with plans to use clear gazing on some hostel windows when the original permission had only allowed for opaque glazing as they faced on to other residential apartments.

Abbey Cottages claims its plans are “respectful of its context and tight brownfield site while offering a commercially viable building to meet the brief and demand for affordable hostel rooms to young travellers in this part of Dublin.”

The development is on the site of a three-storey disused commercial unit which was recently demolished next to the Jervis Luas stop and adjoins a site which is the proposed location of two new hotels providing almost 600 guest bedrooms to be constructed by the Marlet property group.

Marlet said it supported the changes proposed by Abbey Cottages for its hostel as the additional two floors would “ensure consistency” with its own development which is also seeking permission for extra storeys which is the subject of a separate appeal to An Bord Pleanála.