Ten-acre site could allow for more than 600 apartments 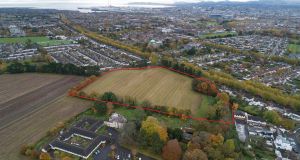 The site of 9.6 acres (3.88 hectares) is located on Griffith Avenue and is being sold by Dublin City University

A residential development opportunity of just less than 10 acres on Dublin’s Griffith Avenue has been brought to market  with a guide price of €35 million.

The site of 9.6 acres (3.88 hectares) is being sold by Dublin City University (DCU), the campus of which sits to the north of the site for sale. DCU bought the lands in the early noughties from a family who control a farm in the city but ultimately the university couldn’t integrate the land into its own campus and decided to sell.

Cushman & Wakefield selling agent Kevin Leonard expects the ultimate owner of the site to have the opportunity to deliver a “prestigious residential development of considerable scale”, given the prime location of the land which will be a five-minute walk from the mooted Metro North stop near DCU if that infrastructure project is ultimately delivered.

Leonard said he expects that about 600 residential properties could be accommodated on the site with a mix of build-to-rent units and homes for individual sale. He added that a student scheme appears unlikely given DCU’s significant planning application for about 1,500 student bed spaces.

The land has about 150 metres of road frontage onto Griffith Avenue, a key arterial route into the city close to Dublin Airport.

At present, the lands are zoned for institutional use but there is precedent in the area to see the zoning changed. Lands on Swords Road sold by Savills last year had also been zoned for institutional use and subsequently received planning permission for 358 apartments. That site sold last year for €30 million to developers Fergus Lynch and Kieran Gannon of the Scaron company.

The land is in an area with significant development and amenities, and sits to the south of a nursing home and to the west of Home Farm Football Club.

The selling agent anticipates that a developer could start work on the site towards the end of the fourth quarter next year, “all going well”. As to whether interest has already been expressed in the land, he said “it’s the kind of site that a lot of these developers have been tracking”.