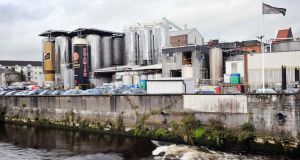 The development of the former Beamish and Crawford brewery has been beset by funding problems and delays since planning permission was first granted in 2011. Photograph: Daragh Mc Sweeney/Provision

The development of a controversial new event centre in Cork is facing further delay after an appeal has been lodged against a revised version of the €80 million much-stalled project.

An Bord Pleanála has confirmed that an objection was made against last month’s decision by Cork City Council to grant planning permission for an expanded version of the long-awaited facility.

The major new centre, which will have a 6,000 capacity, is due to be constructed on the site of the former Beamish and Crawford brewery on South Main Street.

The objection by Eleanor Hunter means the developers must wait until mid-March 2020 before a decision is taken by An Bord Pleanála on whether they can proceed with the revised plans for the event centre which were first lodged in August 2018.

The development has been beset by funding problems and delays since planning permission was first granted in 2011. A sod-turning ceremony for the original plans took place in February 2016 when it was expected the event centre would host its first concert in late 2018.

Funding by the State, which it is understood could total €40 million was only formally guaranteed by the Taoiseach, Leo Varadkar, in September following protracted discussions over the terms of contracts.

The riverside venue – which will be run by the international entertainment group, Live Nation – is being constructed by BAM Property, the building contractor which is also responsible for the development of the new National Children’s Hospital in Dublin–- another project that has been dogged by delays.

The appeal by Ms Hunter, a resident of MacCurtain Street, is based on her contention that not enough is being done to showcase the site’s Viking heritage which she believes should be incorporated into the development. She has called for the event centre to include a Viking heritage centre together with a replica longboat moored on the River Lee that she believed would be “tourist gold dust”.

“I am appealing on the grounds of commercial overdevelopment in the historic core of Cork city which is an area that should be developed primarily for tourism,” she said.

Although Ms Hunter said she was in favour of an event centre at the proposed location, she claimed the current plans would cover up 11th century Viking homes on the former brewery site.

“The revised plans are not good enough and the city itself deserves better,” she added.

“Cork needs an events centre now and an appropriately sized events centre can be located in this area but not at the expense of Cork city’s heritage,” said Ms Hunter.

She described the planning history of the event centre as “pretty much a disaster and embarrassment to date”.

Separately, BAM has also lodged an appeal against a special development contribution of almost €1.7 million imposed as a condition by the council for the provision of a new pedestrian bridge between French’s Quay and Crosse’s Garden.

The construction firm claims it should not be required to fund the cost of the bridge as it was already part of the city’s development plan for many years.

The revised plans propose reducing the capacity for all-seater events to 4,000 and locating a ticket office at the South Main Street entrance.