Frascati developers move to double number of apartments on site 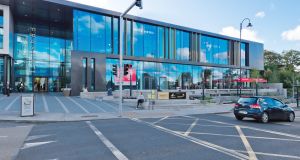 Anchor tenants at Frascati include Marks & Spencer and Aldi.

The developers of the Frascati Centre in Blackrock, Co Dublin, are looking to more than double the number of apartments planned for the site.

The owners of the centre, which recently underwent a reported €30 million programme of extension and refurbishment, have entered into a pre-planning consultation to build 105 apartments on the site located in Blackrock village.

Anchor tenants in the shopping centre include Marks & Spencer, Aldi and, until recently when it announced its decision to close all of its stores in the Republic, Debenhams. Frascati appears to have guarded against the closure of Debenhams, having speculatively received planning permission to break up that unit into a series of smaller units in December of last year.

The plans, which included a first floor “podium level” car park, had the apartments located at the northwest of the site, bringing total car parking from 556 to 604 spaces.

Now, the developers have moved to alter that permission and build 105 apartments. They have entered into a pre-planning consultation with An Bord Pleanála under the strategic housing development scheme. An application under this scheme allows them bypass the local authority and requires a developer to build more than 100 units.

The original plan to construct 45 apartments was not without controversy, with local residents complaining over the “unacceptable scale, mass and bulk” of the development.

Burlington Real Estate, the agent for the landlord, declined to comment.

The centre was originally developed by the Roche family, the founders of Roches Stores, which was the main occupier of the centre until Roches was sold to Debenhams more than a decade ago. Ownership changed hands again in 2016 when Invesco, an US investment management company, agreed to pay about €68 million for the centre.

The centre has doubled in size and now has more than 15,790sq m (170,000sq ft) for retail and other uses after its recent refurbishment and extension. In addition to its anchor tenants, the centre has an extensive retail offering and several restaurants.