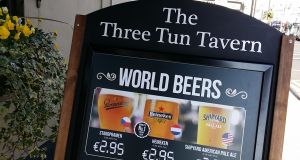 Pub group JD Wetherspoon has secured planning permission for its new Irish outlet in Dublin’s Grand Canal Dock although there is now a question mark over whether it will proceed.

Dublin City Council has approved the company’s application to convert the former HQ bar and restaurant on Hanover Quay, which Wetherspoon’s bought last year for an undisclosed sum, and amalgamate it with the former Nutbutter restaurant on Forbes Street.

However, a spokesman for Wetherspoon said all building projects were being “put on hold” currently due to the Covid-19 crisis.

The UK-based pub chain said it spends an average of €2 million on the conversion of each new pub.

Wetherspoon said it was important for the council to appreciate that its outlets were “not just pubs in the conventional sense nor should they be considered to provide superpubs”.

The company estimated that food sales will account for 45-50 per cent of total sales at the Hanover Quay outlet.

The new pub was scheduled to begin trading by early June but its opening date is likely to be pushed back due to the coronavirus pandemic.

The group which operates over 900 pubs in the UK currently has seven pubs in Ireland with five in Dublin and one each in Cork and Carlow.

As part of a €30 million investment in the Republic, Wetherspoon is also opening a new pub on Camden Street in Dublin which will incorporate an 89-bedroom hotel, while another outlet is planned for Waterford.

The pub chain has recently faced strong criticism over its treatment of staff and suppliers during the Covid-19 pandemic after it shut its outlets, as well as for the strong pro-Brexit stance of Wetherspoon founder and chairman, Tim Martin.

In its planning application, Wetherspoon claimed its reputation was “very positive in the UK when it comes to the revitalisation of historic buildings”. It said the group’s policy was to operate all its public houses in such a way as not to cause a negative impact on their neighbours.

It said it took the issue of noise pollution very seriously and confirmed the new pub on Hanover Quay will operate without music of any type. The company also promised that its staff would conduct regular checks on the external seating area to ensure that the right of the pub’s neighbours to the quiet enjoyment of their homes and businesses was respected.

Closing time for the new pub will be 11.30pm on Monday-Thursday, 12.30am on Friday and Saturday and 11pm on Sunday.

The council imposed a condition that the new pub cannot open to serve breakfast before 8am; Wetherspoon had sought to be allowed open from 7am.

Council planners said Wetherspoon would need to make a separate application for planning permission for an external seating area.

1 Should my mam wait for house prices to drop before buying?
2 Brother is dragging his heels as executor of uncle’s will - is there anything I can do?
3 Covid-19 mortgage breaks: What’s the catch?
4 Covid-19 takeover of private hospitals to cost insurers €180m
5 Almost 70% of home buyers to purchase within next year
6 Revenue faces US drug company Perrigo over disputed €1.64bn tax bill
7 Cheers: Conor McGregor's whiskey races up the sales chart
8 Consumer watchdog tests face masks to ensure they meet standards
9 ‘I’m so lucky to be in the Caribbean – a million miles from Derry Girls’
10 Coronavirus: Workplaces review office design with view to return
Real news has value SUBSCRIBE