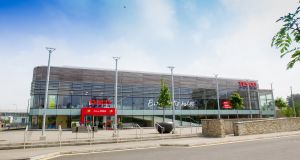 The Tesco store in Roscrea is let to Tesco Ireland on a 35-year lease from July 1st, 2011.

Following the successful sales of two supermarket investments in Gorey, Co Wexford and Cahir, Co Tipperary, TWM have relaunched the sale of the Tesco supermarket in Roscrea. This had been on the market previously as part of the “supermarket portfolio”. While bids were received for the overall, approaches on the individual assets directed the vendor to split up the portfolio. Tesco Gorey was acquired by French fund Corum for just over €20 million providing them with a net initial yield of 7 per cent. The Aldi supermarket in Cahir was sold for more than €4 million, providing the purchaser with a net initial yield of 6.3 per cent.

The grocery sector is one area of retail that offers investors a safe return on their investment and, now more than ever, is regarded as a defensive play. The latest research from Kantor report that the Irish grocery market hit a new milestone over the Christmas period surpassing €1 billion for the first time on record. In the UK, a supermarket Reit had an equity placing in September 2019, and demand was such that the amount raised was double their initial target.

Owned by an overseas syndicate, the Tesco in Roscrea is now being brought to the market at a price of €8.8 million which will provide an initial net return of 9.82 per cent. The lease to Tesco provides for an uplift in the rent in two years through a consumer price index (CPI) mechanism whereby the accumulated CPI uplift over the first 10 years of the lease is applied to the rent. As of today the rent, ignoring any uplift over the next two years, would increase to more than €989,000. This would increase the investor return to 10.2 per cent.

The property, constructed in 2011, comprises a modern detached retail building with supermarket at ground-floor level and car parking at lower ground floor. The property extends to about 4,333sq m (46,640sq ft) together with 224 car spaces.

The property is let to Tesco Ireland on a 35-year full repairing and insuring (FRI) lease from July 1st, 2011. There is a tenant break option after 15 years which is in 2026. The annual passing rent is €950,000 per annum and the lease provides for the rent to be adjusted in line with the compounded annual proportionate change in the consumer price index after year 10 and five-yearly thereafter.

Tesco Ireland is a wholly-owned subsidiary of Tesco Ireland Holdings Limited with the ultimate parent company being Tesco Plc. The accounts for Tesco Ireland are prepared on a consolidated basis in the accounts of Tesco Plc. Tesco reported group sales of £56.9 billion in the year ending February 23rd, 2019, an increase of 11.5 per cent from the previous financial year. Group operating profit was £2.2 billion for the financial year ending February 2019, an increase of 35 per cent on the previous year.

Tesco is a leading supermarket retailer in Ireland with a 21.1 per cent share of the grocery market. Tesco has 151 stores in Ireland and employs about 13,000 people.

Sean O’Neill of selling agent TWM said: “The high and very secure income return will be attractive to investors in today’s low interest rate environment with the town centre location of the asset also providing longer-term options for alternative uses.”