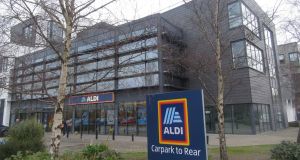 Aldi occupies the Carrigtwohill premises on a 25-year lease from January 2008 on an annual rent of €451,719

French asset management company Corum has increased its overall investment in Ireland and Northern Ireland to more than €211 million with the acquisition of the Aldi supermarket in Carrigtwohill, Co Cork, for about €5.6 million.

The price paid for the property represents a net initial yield of 7.34 per cent and a capital value of €328 per square foot.

Aldi occupies the premises on a 25-year lease from January 2008 with a passing rent of €451,719. The subject property briefly comprises a ground-floor retail store extending to 17,046sq ft within a larger multistorey building at the mixed-use Castle Square development. The unit is located on the main street to the west of Carrigtwohill town centre.

Cearbhall Behan of Behan Irwin & Gosling inc Downing Commercial acted on behalf of the vendor, while Aoife Murray of Colliers acted for the purchaser.

Commenting on the transaction, Ms Murray said: “This is an excellent purchase, especially in today’s challenging economic climate, and with such a resilient retailer it will further bolster Corum’s Irish portfolio.”

In January the French investment giant paid a total of €60 million to acquire One Kilmainham Square in Dublin 8 and Classon House in Dublin 14 from a joint venture partnership led by Avestus Capital Partners.

In 2019, Corum acquired the Tesco supermarket in Gorey, Co Wexford, and South Point at Grand Canal Dock, Dublin, for €21 million and €12.7 million respectively.

A year earlier it paid more than £16.4 million for 40-46 Donegall Place in Belfast city centre. The sale of the property, which is occupied by Next and Eason, represented the company’s first investment in the Northern Ireland market.

In 2017, Corum paid € 14 million to add the Joyce’s Court retail and office complex off Talbot Street, Dublin, to its then €80 million portfolio of Irish assets. The company had previously acquired Voxpro Office Park in Cork and another office complex in Galway as well as Harvey Norman’s retail store in Cork.

UK house price growth picked up unexpectedly in February 08:11
Zoom shares rise on strong current-quarter forecast 08:11
Volvo to sell electric cars only by 2030, company says 07:50
Dalata posts loss of €112m due to Covid hit as Pat McCann to step down as CEO 07:49
Flutter’s revenues rise but profits down due to charge related to Stars deal 07:32