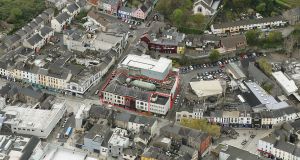 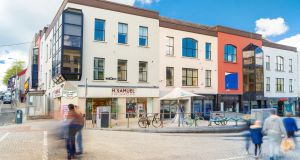 The sale of the Broad Street Centre in Waterford city offers investors the opportunity to secure a net initial yield of 10.62 per cent from a long-established mixed-use scheme with a strong rent roll.

The development which is being offered to the market by agent Knight Frank at a guide price of €5 million, comprises a three-storey over-basement level scheme providing 1,254sq m (13,498sq ft) of retail space and 1,512sq m (16,283sq ft) of office accommodation. The centre accommodates seven own-door retail units at ground floor with office and storage accommodation overhead.

Some 65 per cent of the scheme’s 2,766sq m (29,772sq ft) is occupied by high-profile domestic and international tenants including H Samuel Jewellers, Mountain Warehouse, AIB Bank, Irish Life and Footlocker. The weighted average unexpired lease term certain for the scheme’s existing tenant base is approximately 5.45 years.

Waterford is Ireland’s oldest and fifth largest city and is the economic capital of the southeastern region. The city has been designated as a gateway city by the Government under the National Spatial Strategy for Ireland while the National Planning Framework has set a growth target of 50 per cent for Waterford by 2040. The city is highly accessible, bound by the N25 which adjoins the M9 motorway, allowing onward access to Ireland’s national road network with arterial routes running across the entire country.

Plunkett Train Station is a 10-minute walk from the subject property, providing regular access to both Dublin and Limerick.

In the more immediate term, Waterford has seen significant investment in recent years.

The introduction of the feature canopy over the Apple Market has adapted it for year-round use while the much-anticipated North Quays development is due to be submitted for planning approval before the end of the year. The total investment on the North Quays scheme is estimated to be in the order of €350 million and is expected to significantly bolster economic activity within Waterford’s core central business district.