Marlet gets €45m from sale of 56 Dublin docklands apartments 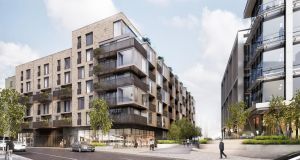 An artist’s impression of the Ropemaker Place apartment scheme at Cardiff Lane in the Dublin docklands.

Developer Pat Crean’s Marlet Property Group has secured in the region of €45 million from the forward sale to German fund, Realis, of 56 high-end apartments it is developing in Dublin’s south docklands.

Upon completion, the seven storey over-basement development will also include 181sq m (1,947sq ft) of retail accommodation as well as a concierge service and on-site amenities for residents.

Marlet’s disposal of the Ropemaker Place apartment scheme comes just four months on from its sale for €240 million of the Sorting Office to Singapore-headquartered real-estate investment trust Mapletree Investments.

The sale of the Sorting Office delivered a significant return for Marlet and its finance partners, M&G Investments. The site was acquired from An Post in 2015 in a transaction valued at € 40 million. The closure of the deal represented Mapletree’s first office acquisition in Ireland, and its eighth investment in Europe.

Both the Sorting Office and Ropemaker Place are well-located in Dublin’s south docklands, directly opposite the Bord Gáis Energy Theatre and within close proximity to the European headquarters of several global technology giants including Google, Facebook, and Airbnb. The area is also home to the offices of Accenture, BNY Mellon, Bank of Ireland, HSBC, LogMeIn, Matheson, State Street and TripAdvisor.

Speed of essence for vaccines but so is clarity around data 05:55
Stocktake: Betting against Robinhood users is profitable 05:50
Retailers need to find their ‘theatre’ for town centres to survive 05:41
Stocktake: Trump talks bull as Dow tops 30,000 05:40
Ireland’s ageing population to cost exchequer €850m a year 05:39