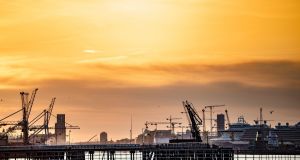 Dublin Port Company said its masterplan provides for Dublin Port reaching its ultimate capacity by 2040 without the need for any further infill of Dublin Bay. Photograph: Sergiu Cozorici/Getty

A business group in Dublin’s Docklands has questioned if a €320 million project by Dublin Port Company to double capacity is in the interests of businesses and local residents.

The Docklands Business Forum is expected to raise concerns about the proposed major development of port infrastructure at an oral hearing of An Bord Pleanála on Monday into an application by the Dublin Port Company for planning permission for the second phase (MP2) of its masterplan 2040.

The MP2 project seeks a 15-year permission for phased development works on a 165-hectare site including a new roll-on, roll-off jetty that can cater for vessels up to 240m (790ft) in length and the redevelopment of a little-used oil berth for a deep-water container facility.

Other elements include consolidation of passenger terminal buildings and creation of a “heritage zone” at the eastern end of the port which will include a viewing structure and amphitheatre accessible from a 4km greenway.

The port company said its masterplan provides for Dublin Port reaching its ultimate capacity by 2040 without the need for any further infill of Dublin Bay.

However, the forum – which has more than 100 members, representing 35,000 employees – said continued location of the port in the city centre is an unresolved issue for many.

In a written submission to An Bord Pleanála, forum chief executive Alan Robinson said the board needed to consider wider consequences for the city’s sustainability as an inviting urban centre for business and residents.

Mr Robinson said it was a stated objective of Dublin City Council to promote residential development and encourage people to live in the city centre, including families.

“This objective seems incompatible with the strain on urban infrastructure that the development will cause,” said Mr Robinson.

He noted that several other cities including Barcelona, Bremen, Copenhagen, Amsterdam, Oslo, London and Cape Town had all moved their ports in the past 20 years to “liberate” land and create beautiful new living spaces.

“It seems out of step of international best practice for a port so closely located to the city centre to not only refuse to seriously consider moving to a more appropriate location but to seek, as the Dublin Port Company does with this application, to double its capacity,” said Mr Robinson.

He claimed the project, if approved, would protect the port company’s dominance in the export market where it alreadyholds 89 per cent of the roll-on, roll-off sector and 73 per cent of container traffic.

“If a private company possessed such market power, there would almost certainly be calls for it to be curtailed or broken up,” said Mr Robinson.

He also claimed there was much evidence to suggest Dublin Port was no longer fit for purpose, such as the projection that it will reach its maximum capacity by 2040 and its needs to acquire 44 hectares of land near Dublin Airport for its “inland port”.

Mr Robinson noted that the port company has had to cut the number of cruise ship visits to Dublin by half to facilitate the space it needs for freight traffic.

He said such a development was “unfortunate” as many of his members had initiated, and invested heavily in, building up the city’s cruise ship business.

However, the forum welcomed the port company’s plans for a heritage zone and its establishment of two €1 million trust funds to develop a city farm and support St Joseph’s Co-Educational National School in East Wall.

At the same time, Mr Robinson questioned if such heavy investment in a heritage zone would receive the necessary footfall to make it a success.

Concerns about the project will also be raised by local Green Party Cllr Donna Cooney and the Clontarf Residents’ Association at Monday’s hearing.

The port company said the MP2 project was necessary to maintain competitiveness and operational efficiencies.

“It is fundamental to meeting capacity projections up to 2040 and will ensure the port has the necessary infrastructure to meet developments in shipping internationally where larger ships are becoming the industry norm,” said the port company.

1 Fair Deal nursing homecare leaves little for bills and gifts
2 Portugal set to curb tax breaks for wealthy foreigners
3 Tax and spend: What have FG done for your pocket?
4 Pensions row fix could threaten future of State payment, actuaries warn
5 US budget deficit forecast to blow out by mid-century
6 Accumulated profits at Kathryn Thomas’s media company rise to €420,000
7 Domestic economy to grow by 3.6% but Brexit threat looms
8 Court asked to impose maximum disqualification on director
9 Pound dips as Bank of England decision looms
10 Are there annual limits on inheritances or gifts to a child?
Real news has value SUBSCRIBE