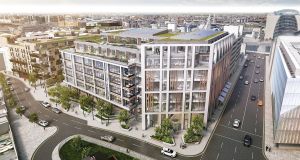 When the total volume of investment in Ireland’s commercial property market hit a record €4.6 billion in 2014, any expectations of that figure being surpassed anytime soon were few and far between.

Just five years on, however, the consensus within the industry is that a new benchmark of around €5 billion will be set. While the number is eyewatering in and of itself, it is all the more extraordinary when one considers the various domestic and international factors that have served at different times during the year to give local and international investors pause for thought.

Here at home, Minister for Finance Paschal Donohoe’s Budget 2020 stamp duty hike and Reit policy changes served to shake investor confidence, while on the global stage, the known unknowns of Donald Trump’s US presidency and the UK’s self-flagellation over Brexit, weighed heavily on buyers and vendors alike.

But with international funds still looking for a long-term home in an era of record low bond yields and interest rates, Ireland and more particularly Dublin’s standing as a location to deploy capital came into its own, as the top 10 deals below illustrate.

1 The Green Reit portfolio, Dublin – €1.34 billion
The largest deal of the year and the largest direct asset sale ever in the Irish market has served to propel this year’s record investment spend to the €5 billion mark. Having assembled a portfolio comprising Horizon Logistics Park and prime Dublin offices such as One Molesworth Street and the Central Park campus in Sandyford under founders Pat Gunne and Stephen Vernon, Green Reit surrendered its stock market listing last month following the acquisition for €1.34 billion of its assets by UK-headquartered, Henderson Park Capital.

2 The “XVI” portfolio, Dublin & Cork – €285 million
In July, the Competition and Consumer Protection Commission (CCPC) cleared the way for Ires Reit’s €285 million purchase of the 815 homes in the “XVI” (16) portfolio from US private equity giant, Marathon Asset Management. Distributed across 16 high-end developments in Dublin and Cork, the portfolio largely comprises the 588 apartments for which Marathon paid Nama € 120 million in 2015 as part of the Project Plum loan sale process. Included in the Plum portfolio’s prime assets were 101 apartments at Beechwood Court in Stillorgan, 67 units at Time Place on Corrig Road in Sandyford, 39 apartments at Heywood Court at Northwood in Santry and 128 apartments at Northern Cross on the Malahide Road.

3 The Sorting Office, Dublin docklands – €240 million
In June, Pat Crean’s Marlet Property Group and its finance partner, M&G Investments, secured a significant return from the sale of the Sorting Office to Singapore-headquartered real estate investment trust, Mapletree. Located on a site in the Dublin docklands which Marlet and M&G acquired from An Post for €40 million in 2015, the 19,510sq m (210,000sq ft) office scheme represented Mapletree’s first acquisition in Ireland. Google is currently in talks to rent the development in its entirety to facilitate the expansion of its Dublin-based workforce.

4 Heuston South Quarter (HSQ), Kilmainham, Dublin 8 – €222 million
While Henderson Park Capital hit the headlines in a big way this year with its purchase of Green Reit, it made its first foray into the Irish market last May when it teamed up with developer Joe O’Reilly to acquire the landmark Heuston South Quarter (HSQ) in Dublin city centre from US property giant Marathon Asset Management for €222 million.

The price paid by Henderson Park represented a premium of 85 per cent on the €120 million HSQ’s former owners, Marathon, paid Lloyds Banking Group to acquire the loans associated with the scheme in 2014.

5 Four and Five Dublin Landings, Dublin docklands – €205 million
The success of Ballymore and Oxley’s Dublin Landings mixed-use scheme continued apace this year with the sale of blocks 4 and 5 at the sprawling docklands development to the Central Bank of Ireland for €98.6 million and €106.5 million respectively. Located next to the Central Bank’s existing headquarters on North Wall Quay, the blocks extend to a combined floor area of 200,000sq ft (18,850sq m), and will be used to accommodate the expansion of its existing 1,815-strong workforce by up to 300 employees.

6 Five Hanover Quay, Dublin docklands – €190 million
Targeted Investment Opportunities ICAV (a joint venture between funds managed by Oaktree Capital, Bennett Group and Nama) didn’t have to wait long to find a buyer for Five Hanover Quay. Having put the fully-let prime Dublin docklands office building on the market last May, they agreed its sale for “just over” €190 million to German-based fund manager, Union Investment, in August. The property, which comprises 14,864 sq m of office space distributed across seven floors, is let to various tenants including technology company DocuSign and Aptiv, a global auto parts company.

7 Nova Atria, Sandyford – €167 million
With the ink barely dry on its €240 million purchase of the Sorting Office, Singapore-headquartered Mapletree hit the acquisition trail again, snapping up the Nova Atria office campus at Sandyford in south Dublin from US private equity firm, Blackstone, for €167 million. The closure of the deal in October brings Mapletree’s investment to date in the Irish office market to €407 million.

Nova Atria comprises two office blocks comprising a total of 320,000sq ft known as Nova Atria North and South. Nova Atria North is let to a number of tenants while all 15,939sq m (172,121sq ft) of space at Nova Atria South was let to Facebook by the scheme’s previous owners, Blackstone, earlier this year.

8 Reflector Building, Dublin docklands – €155 million
While several parties including German asset manager, Wealthcore, and South Korean bank holding company, Hana Financial Group, were linked to its purchase since it was brought to the market last February, another German investor, Deka Immobolien, came through to acquire the Reflector Building for €155 million.

Completed by Michael Cotter’s Park Developments in 2018, the Reflector is a six-storey over-basement building comprising 11,250sq m of office space and 329sq m of retail space, with 34 car-parking spaces. The property is producing annual rental income of around € 7 million from several tenants, including Airbnb, LogMeIn and web designer Wix.

Marlet assembled the Charlemont Exchange development originally through the acquisition of Charlemont Blocks A, B and C in March 2017, followed by the purchase in December 2017 of Charlemont Block D. Marlet subsequently extended the combined footprint of the four-building scheme from its original 94,968sq ft to 121,270sq ft in the course of refurbishing the scheme.

Prior to selling the development, Marlet agreed a lease with flexible workspace provider, WeWork, for all four blocks at a rent of €55 per square foot.

Whelan’s acquisition of the 3.57-acre site represented the biggest development land deal of 2019, and was backed by a number of New York-based high net worth family offices. Debt finance for the deal was provided by Fairfield Real Estate Finance led by Chris Wilson and BentallGreenOak which was led by its Dublin-born vice-president Allen Crampton.

Westridge is in the process of preparing a planning application for a major mixed-use scheme comprising mainly Grade A office space alongside a large element of private rented sector (PRS) apartments, and food and beverage offerings. The former DIT campus is located just 300m from the Luas Green Line stop at St Stephen’s Green, and within walking distance of the city centre.

€100 million mark
Outside of the top 10 deals by value, numerous other transactions during the year eclipsed or at least equalled the €100 million mark. In the hotel sector alone, both the Marker and the Conrad changed hands for €134 million and €116 million respectively. Henley Bartra, a joint venture between UK private equity giant Henley and developer Richard Barrett’s Bartra Capital, meanwhile paid €125 million for 500,000sq ft of offices and data centre assets distributed across the Citywest Business Campus in Dublin and Cork Airport Business Park.

The fast-growing private rented sector (PRS) market was a hive of activity with notable deals including the sale to DWS for €108 million of 214 apartments at the Cosgrave Property Group’s Fairways scheme in Dún Laoghaire, and the sale to Patrizia of 179 apartments at Marlet’s Mount Argus scheme in Harold’s Cross for €100 million.

Among the deals understood to have been agreed but not yet finalised are Starwood’s sale for €535 million plus of five prime Dublin office properties, known collectively as the Cedar portfolio to US private equity giant Blackstone; Tristan Capital Partners’ sale for €214 million of the 382 apartments in the Vert PRS platform to Avestus Capital Partners, and the €185 million acquisition by a fund managed by Davy Real Estate of St Stephen’s Green shopping centre.