Move comes amid growing demand, including from international students 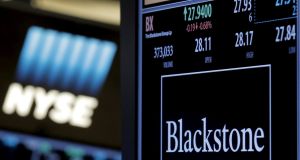 New York Stock Exchange. The UK’s purpose-built student accommodation market is valued at over £50bn, according to a report from Knight Frank in June. File photograph: Brendan McDermid/Peuters

Blackstone is considering a bid for the UK student accommodation company IQ, people familiar with the matter said, in a deal that could be worth as much as £4 billion and would further expand the private equity giant’s real estate footprint.

The US buyout group is in the early stages of weighing a bid for the business, which is considering either a listing or a sale in 2020. A deadline for initial bids is before Christmas and IQ Student Accommodation expects offers in the region of £4 billion, a person familiar with the process said.

The move comes amid growing demand for student housing, including from international students at British universities. The UK’s purpose-built student accommodation market is valued at more than £50 billion, according to a report from Knight Frank in June. That growth is fuelled by a rise in international students at British universities despite uncertainty about Brexit, it said.

IQSA owns and operates 67 student accommodation sites in the UK, stretching from Dundee to Plymouth. More than 80 per cent of its portfolio is in towns that house prestigious Russell Group universities.