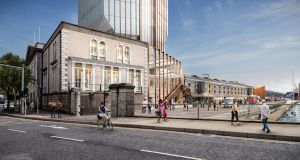 Development will link the peninsula to the centre of the city while introducing a large public realm for the first time.

The redevelopment of the Custom House Quay site in Cork is expected to create more than 800 new jobs, while a new 34 storey hotel tower would become the Republic’s tallest building.

Development management firm Tower Holdings Group released details for the redevelopment and revitalisation of the site on Friday.

The project will support 350 to 400 construction jobs in the short term, with employment on the completed site expected to be in excess of 800 people across hotel, retail, tourism and commercial offices.

The development will link the peninsula to the centre of the city while introducing a large public realm for the first time in the history of the site.

It will feature the restoration of the existing landmark structures and the introduction of a new hotel tower, which at aout 140 metres tall will become the Republic’s tallest building. It will host 240 rooms and 25 serviced apartments.

The building, if granted planning permission, will dwarf many of the State’s tallest buildings. It would be more than twice the size of Dublin’s 59-metre Liberty Hall, and significantly taller than its nearest competitor, the 79-metre Capital Dock in Dublin.

The hotel has not been named yet but Tower Holdings said there had been “active and comprehensive early engagement” with a number of international hotel flags that have “contributed to the design outcome”.

The hotel accommodation will offer spa, swimming pool and gym facilities. At its very top the tower will feature a sky bar.

The overall development will offer a programme of cultural events, retail, food and beverage businesses, office space and recreational areas which will be fully accessible to the public, in an effort to create a realm for the wider community.

The restoration of the custom house will include a new façade over the building’s northern end to create balance to the previous extension on the south.

The bonded warehouses will be opened up for public access, which will include retail units for local entrepreneurs, and a cultural experience representing Cork’s history as a port.

The development will be completed with the introduction of a micro-distillery at the eastern end of the site.

“For the first time ever, this entire area will be fully opened up to the people of Cork,” he said.

“As the tallest building in Ireland, the hotel itself will be a focal point for the city rising. Equally, the design is aimed at preserving the existing infrastructure for future generations through the addition of new tourism and commercial offerings.

“We firmly believe that Custom House Quay will rival similar offerings in other cities around the globe, and help contribute to the future success of the city in the same way that the Port of Cork did for centuries.”

Designed by architecture firm Gensler in association with Henry J Lyons as local architects, the new hotel tower will be incorporated to complement the old Custom House and bonded warehouses.

Gensler design director Marco Gamini said: “Whilst maintaining and enhancing the original architectural intentions of this heritage site and its historic past, the addition of a new landmark tower, will help create an icon for the city, helping secure its future.”

Planning permission for the new development is expected to be lodged later this month.