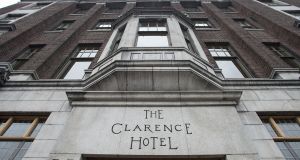 Press Up Entertainment’s decision to acquire the leasehold of the Clarence consolidates its position within Dublin city centre and on Wellington Quay particularly. Photograph: Dave Meehan

Paddy McKillen jnr and Matt Ryan’s Press Up Entertainment Group has moved to expand its growing empire of hotels, restaurants and venues yet again with the addition of the four-star Clarence Hotel to its portfolio.

While Press Up had already been managing the hotel’s operations for the last number of years, its has now taken full control of the venue with the acquisition of its leasehold interest and business. Bono, the Edge and Paddy McKillen snr continue to retain ownership of the hotel building following the conclusion of the deal.

Press Up Entertainment’s decision to acquire the leasehold of the Clarence consolidates its position within Dublin city centre and on Wellington Quay particularly. Prior to the transaction, it already owned the adjoining Dollard & Co Food Hall & Deli, Roberta’s Restaurant, Tomahawk and The Workman’s Club.

Press Up is set to expand its operations even further this autumn with the planned opening of a new restaurant in Dublin’s Docklands.

With a location on the ground-floor level of the newly-developed Opus apartment building at 6 Hanover Quay, MacKenzies – as it will be known – will offer what Press Up describes as “premium casual” dining.

Quite apart from catering to a traditional customer base, the new 5,000sq ft restaurant will also be offering a dedicated inhouse delivery service to the residents of the Opus, both to their apartments and to the building’s private roof garden. The opening of MacKenzies will bring the number of venues operated by the Press Up Entertainment Group in Dublin to 47.