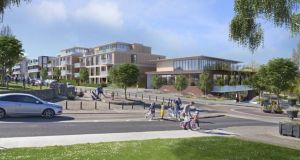 An artist’s impression of the overall scheme Oakmount intends to develop at Mount Merrion in south Dublin.

Developer Paddy McKillen jnr’s Oakmount has commenced the construction of 52 apartments on the prominent Flanagan’s of Mount Merrion site in south county Dublin.

In something of a departure from the current market trend whereby entire apartment blocks are being sold to institutional investors in the fast-growing private rented sector, all of the available units will be offered for sale to individual buyers.

The development of the apartments represents the first phase in Oakmount’s plan to transform the overall 0.76 hectare (1.88 acre) site occupied by the former Flanagan’s furniture store and the adjacent Union Cafe.

The 52 apartments on the Flanagan’s portion of the site are scheduled for completion in December 2020. In the case of the Union Cafe site, work is expected to get under way within the next 12 months on the delivery of a further 50 apartments, a 15,000sq ft pub and restaurant, and a 119-space underground car park.

While Oakmount’s decision to deliver the Mount Merrion scheme is in keeping with its original stated intention to develop the project in line with its existing planning permission, the company did give serious consideration to selling the Flanagan’s and Union Cafe sites last November.

Having acquired the Flanagan’s site just five months previously for about €7 million, the company put the overall site up for sale with agent Knight Frank at a guide price of €32 million.

In offering the portfolio to the market, the selling agent noted that the prospective purchaser would have an opportunity to devise an overall master plan for the site in line with current planning policy changes promoting better land use and higher-density development.

In preparation for the sale, architects O’Mahony Pike undertook a feasibility study for the entire site to provide 193 build-to-sell apartments. Quite apart from highlighting the potential to nearly double the number of residential units provided for under the site’s two existing planning permissions, the study also incorporated 468sq m (5,037sq ft) of commercial space.

While it understood a number of parties expressed their interest in acquiring the Mount Merrion site, Oakmount decided not to proceed with its sale.