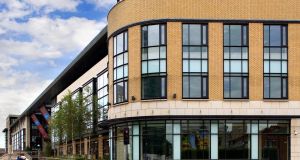 The Watermarque Building in Dublin 4 is among the offices being put up for sale by Starwood Property Trust.

Starwood Property Trust is preparing to sell a portfolio of offices in Dublin, according to a person familiar with the matter, in what would be one of Ireland’s biggest property sales.

Starwood has hired CBRE and Eastdil Secured to sell the offices in central Dublin for about €530 million, according to the person, who asked not to be identified as the information is not public. The portfolio could be placed on the market as soon as July.

Among the offices included in the sale will be the Watermarque Building in the so-called Silicon Docks.

Starwood’s tenants in Dublin include Marsh & McLennan, Airbnb and WeWork.

Starwood bought the portfolio in 2015 as the State recovered from the worst property crash in western Europe after the global financial crisis. A host of international investors bought Irish real estate after the collapse, and have since sold on as prices recovered.

The offering comes as Green Reit, one of the State’s biggest property firms, is selling itself. Together, the two sales will represent a test of investor confidence in Ireland’s latest real-estate boom.

Starwood has been involved in a number of other transactions in Ireland since acquiring the portfolio that is coming to market. Earlier this month, Urbeo Residential, an Irish residential investment platform that it has backed, was reported to be closing in on a deal to acquire a scheme of 282 apartments being developed by Cairn Homes at Citywest in Dublin.

Urbeo also lost out to listed property vehicle Ires Reit for a portfolio 815 apartments – the largest disposal of buy-to-let properties to date – located at 16 locations across the State in a €285 million deal. That remains the largest single property sale in 2019.

Earlier in the year, Starwood was in talks with investment group Tetrarch Capital about a joint venture partnership that would be worth several hundred million euro, and replace the Irish-owned hotelier’s plan for a public flotation.