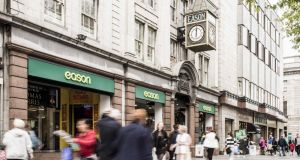 Eason’s shop on O’Connell Street in Dublin has four floors of retail extending to a combined 3,872sq m (41,680sq ft).

Eason has put its flagship shop on O’Connell Street in Dublin on the market at more than €24.5 million through agent Bannon.

The shop has 5,726sq m (61,630sq ft) of space over seven storeys with four floors of retail extending to a combined 3,872sq m (41,680sq ft). It is accessed from O’Connell and Abbey streets close to the intersection of the Luas red and green lines.

While the fine carved limestone facade is listed, the interior contains “nominal features of historic relevance which would inhibit its future development capacity”, according to the agent.

The shop, however, has undoubted historic importance. It was occupied by the rebels during the 1916 Rising and sustained significant damage after British forces shelled the street from the Helga anchored on the Liffey near the Custom House. The shop was rebuilt over 1917-1919 and was one of the first structures in Dublin made with a reinforced concrete frame.

Yet Eason’s history on O’Connell Street goes back further to 1886 when Charles Eason acquired the store from WH Smith, where he was a manager at the time. Eason went on to establish one of Ireland’s best-known businesses.

O’Connell Street, despite significant State investment in its redesign and transport infrastructure, has been in steady decline for decades. However, redevelopment work on the former Clerys store began earlier this year to turn it into three floors of retail, offices and a 176-bedroom four-star hotel. In addition, UK property group Hammerson recently sought permission for a retail, office, hotel and residential development on the Dublin Central site which stretches from O’Connell Street and Moore Street, to Henry Street and Parnell Street.

The sale of Eason on O’Connell Street is part of an ongoing property disposal programme first announced by the company in 2018 to sell 13 properties in the Republic which could generate a €60 million windfall. Some €20 million of this would be transferred to its retail business, and the rest divided among its 220 shareholders.

In March its flagship Shop Street premises in Galway city centre came on the market at more than €8 million. It is also for sale by way of a sale-and-leaseback deal with Eason offering to take a 25-year lease on the premises at a rent of €525,000 per annum.