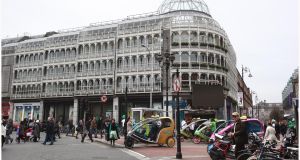 Developed in 1988 by British Land, the shopping centre has more than 90 shops over three levels. Photograph: Brenda Fitzsimons

Two separate shareholdings amounting to a 62.4 per cent stake in Dublin’s St Stephen’s Green Shopping Centre are being quietly offered for sale in a targeted process at a guide price of €130 million.

The shares in question are held by New York-headquartered Madison International Realty and businessman Pierce Molony, and comprise individual holdings of 35.4 per cent and 27 per cent respectively.

The remaining 37.6 per cent stake in the landmark retail scheme is owned by Irish Life, and is not being made available for sale as part of the process now being handled by HWBC.

While a source familiar with the matter said they would not rule out the possibility of Irish Life seeking to secure full ownership of the shopping centre, it is understood that several other potential buyers have been approached in recent weeks in relation to the property.

It is understood potential investors have been briefed on the centre’s capacity to accommodate an additional 200,000sq ft of space. The majority of this would be office space and built above the existing retail scheme.

Should HWBC manage to secure the €130 million it is guiding for the combined 62.4 per cent shareholding in the St Stephen’s Green centre, Madison would be in line for a payout of around €73.75 million. Such a figure would represent an enviable 22.9 per cent return on the company’s original investment at a time when physical retail is being challenged by the growth of online shopping.

7 State factors in reduction of €2bn in corporation tax