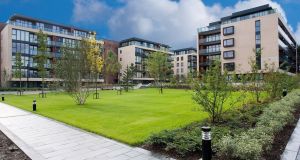 Kennedy Wilson Europe was the highest bidder for 274 of the 507 completed apartments at the Grange.

Kennedy Wilson Europe, purchaser of well over €1.5 billion worth of high-profile property assets since the market collapsed in 2008, has acquired more than half the completed apartments at the Grange in Stillorgan, Co Dublin.

The company was the highest bidder at €160 million for 274 of the 507 completed apartments and a 4-acre site, which is expected to accommodate an additional 263 apartments.

Joint selling agents Knight Frank and Cushman & Wakefield had been guiding €135 million for the portfolio, which attracted an unusually high level of interest from investment groups largely because of its prime location on the Stillorgan Road as well as the attractive rents available in the development.

The original 11.3-acre site at the Grange was bought by Ray Grehan’s Glenkerrin Homes for about €85 million in 2004. Grehan built and sold 323 apartments before the property crash, when the National Asset Management Agency appointed Grant Thornton to finish off two partially built blocks with a total of 174 apartments. These are included in the ongoing sale, along with 100 other homes peppered throughout seven other blocks.

Kennedy Wilson is among Dublin’s biggest landlords after buying a range of newly developed apartments after the property crash. These included Clancy Quay at Kilmainham, Sandyford Lodge in Ranelagh and the Alliance development on South Lotts Road.

More recently it paid more than €90 million for Ireland’s tallest building, the Elysian Tower in Cork, with 206 apartments as well as offices and shops.

Kennedy Wilson has spent substantially more on commercial properties, such as the Shelbourne Hotel, Stillorgan Shopping Centre, Portmarnock Hotel and Golf Links, Bank of Ireland HQ and the Department of Justice and adjoining KPMG offices on St Stephen’s Green.