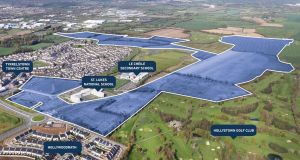 Three-bedroom homes in Tyrrelstown are expected to sell starting at €345,000

A substantial land holding with potential to accommodate 830 to 890 houses at Tyrrelstown, Dublin 15, goes for sale from today on the instructions of receiver Tom O’Brien of Mazars.

James Meagher and Evan Lonergan of agent Knight Frank are guiding €45 million for the 260-acre land bank with a mixture of zoning objectives, ranging from residential and local centre facilities to rural and greenbelt reservations.

Some 17 acres adjoining the existing town centre have been designated for a mainly three- to five-storey development of residential and office facilities over retail, commercial and community units.

Knight Frank described the Tyrrelstown site as “one of the most significant land banks to be offered for sale in recent years”. Not only was it in a much sought after residential location, but it had the potential to deliver more than 800 new houses in the short to medium term. “Given the dearth of land holdings of this scale in the Dublin area, we would expect significant interest in this property.”

The agency said the balance of the lands had a “rural” and “greenbelt” zoning under the Fingal Development Plan, which would allow it to be used for agricultural purposes. However, an 800m road frontage and its layout in a number of divisions meant that it had obvious development potential in the longer term because of its strategic location alongside developed and residentially zoned lands.

In Tyrrelstown, Amazon was recently granted planning permission for a new data centre and in nearby Clonee, Facebook is also gearing up to build another data centre.

Tyrrelstown has two primary schools, Educate Together and St Luke’s, while a new secondary school, Le Chéile, is under construction just the south of the land to be sold. Traders in the village include Lidl, SuperValu and the Carlton Hotel.

Tyrrelstown also benefits from a comprehensive road network, with the new N2/N3 link road providing easy access to both the M2 and M3 motorways. These access the M50 and all main arterial routes into the city centre, which is just 14km from Tyrrelstown. The village is serviced via Dublin Bus routes and is located within a 15-minute drive of Dublin Airport.

As well as the €45 million guide price being quoted for the entire landbank, Knight Frank will also be quoting more than €42 million for the land zoned for residential use and town centre development. The rural and greenbelt lands will have a guide price of €3 million-plus.