Can’t get no satisfaction: Rolling Stones concert not yet sold out

The Rolling Stones frontman Mick Jagger has posted a video of himself dancing on the stage of Croke Park ahead of the band's headline gig this week as part of their 'No Filter' tour. Video courtesy: @MickJagger / Twitter 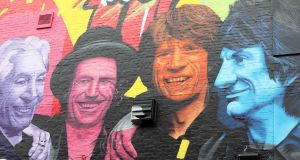 A Rolling Stones mural on the side of JJ Smyth’s pub, a music venue on Dublin’s Aungier Street

It’s only rock and roll, so why pay too much for it? UK supergroup the Rolling Stones may be intent on not fading away as they get ready for their Croke Park gig, but it seems that fewer punters than expected will be spending the night together with the ageing rockers on Thursday.

The concert is the first date of the band’s second leg of the No Filter tour. When launched in March, tickets went on sale at €70.45 for standing, up to € 181 for “gold standard” seats. A further lot of “pit standing” tickets also went on sale for €456.

However, while the gig may have been initially expected to sell out, plenty of tickets are still available on ticketmaster.ie.

Tickets are also available on reselling site Viagogo for sums that appear to be less than the face value of the tickets. While standing tickets, which went for sale at about €70 have sold out, there are still plenty of tickets available for the rest of the stadium. These include 91 golden circle tickets, which originally had a face value of about €180, selling from €110 on Viagogo.com , while lower-tier tickets are also available on the site from €66 – even though such tickets would originally have been on sale from about €90-€181.

Of course Viagogo applies a steep booking charge to these tickets – as much as 30 per cent of the purchase price – which can push the ticket cost up.

Tickets are also available on Seatwave, Ticketmaster’s reselling site, with ticket prices starting at €75.15. Promoters Aiken released a further tranche of tickets in April for the May 17th event.