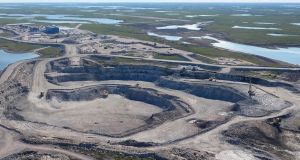 The world’s largest new diamond mine, Gahcho Kue, in the Canadian tundra

MPD, which is a partner with De Beers in the world’s largest new diamond mine, Gahcho Kue in the Canadian tundra on the edge of the Arctic, has appointed former De Beers chief financial officer Stuart Brown.

Mr Brown was De Beers CFO between 2006 and 2011, and acted as the diamond giant’s chief executive for a period in 2010. Immediately prior to joining MPD he was chief executive of Aim-listed, Africa-focused Firestone Diamonds.

Toronto-listed MPD is potentially one Mr Desmond’s most lucrative businesses. He controls a stake of roughly one quarter of MPD, which recently acquired another Desmond-backed entity, Kennady Diamonds, in a C$176 million (€115m) all-share deal.

MPD owns a 49-per cent share in Gahcho Kue, where De Beers owns a majority share and is the operator. The mine, which is expected to last 12 years and cost $1 billion to bring to fruition, produced more than five million carats of diamonds in 2017.