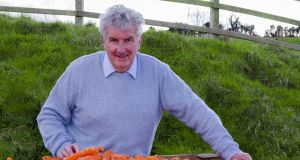 John McCann of Willowbrook Foods. “Not one big customer is more than 20% of our business. If you supply a big multiple it could be 80% of your business”

The managing director of Willowbrook Foods, John McCann, is just off a flight from Aberdeen to Belfast. He was in Scotland with his development manager to meet customers they have there, and to discuss growing their business.

“We have two or three customers in Scotland already and we’d like to grow that to 12 next year. The business is there, so we just have to go out and get it.”

Willowbrook Foods, a fresh food producer of cooked, mashed and prepared vegetable products, has been in business since 1968, when McCann left college with a business degree.

“We had a 120-acre farm at home. I was always interested in growing vegetables, and on the east side of Co Down we had the perfect climate and soil for it.

“At that time it was mostly greengrocers selling vegetables. When supermarkets started to open up, they were lovely and clean, everything was packaged. That was the start of the supermarket revolution in Ireland.”

Willowbrook Foods started supplying what McCann describes as “the most prodigious supermarket in Ireland” – Superquinn. “Fergal Quinn was a man who was way ahead of his time. His idea was to bring a sort of M&S to Ireland, so we were lucky to start with him.”

At the start Willowbrook Foods dealt in prepared vegetables and salad products like lettuce bags They invested in washing machines, drying machines and multi-head weighers for the bags at the factory in Killinchy. They still do a lot of that, particularly in the Republic. They’re not the market leader, but they are a dominant force, said McCann.

“Bagged salads have always been around 40 to 50 per cent of our business. Ten years ago we also started doing washed salads and lettuce for food service in hotels, restaurants and catering.”

Last year the company invested £700,000 in a new facility in Newtownards, Co Down, which is home to their new product development, as well as a cooked food processing factory. There will also be another £1.5 million invested in the next year across both Killinchy and Newtownards. It’s all in an effort to grow their business across the UK, said McCann.

“There might be six to 10 customers in Ireland, but the potential in the UK is 10 times that. The volume of business means that you can buy more automated machinery because you have orders to justify the capital cost of that machinery.”

Willowbrook Foods currently has 70 middle-sized customers. “Not one big customer is more than 20 per cent of our business. If you supply a big multiple it could be 80 per cent of your business,” he said.

The company supplies two or three of the major companies in the UK that work in food service. Working with medium-sized companies means that Willowbrook Foods can fine-tune its product to work with the customer, said McCann.

“If there’s volume in it, we will do it. That means we do multiple new products which the customer needs. We can’t sell the same ready meal for the next five years.”

There have been several recessions in Ireland since the business was established, and the one that everyone remembers following the financial crash stopped the growth of Willowbrook Foods, said McCann. Yet that hasn’t been the only obstacle that stood in its way.

“During the winter we get our lettuce from Murcia in Spain. There were storms and floods in 2016, and all their crops were washed away.”

Of its 300 employees, many come from Europe, and some decided to stop working in the North when the UK announced it was leaving the EU. “That’s causing a labour shortage for us. If it got really bad we might move one of the factories to southern Ireland, an area that would make logistical sense – maybe somewhere like Naas.”

Last month Willowbrook Foods had to recall several salad products containing bacon amid fears of listeria contamination. “Food and health safety is a big issue, and if something’s not right we have to deal with it. We have to be careful about products we buy in because we’re relying on their food safety. We change our supplier instantly when that happens.”

Willowbrook Foods now has a board of directors which is thinking about the next step for the company when McCann retires.

“What we really need is more senior management, and a new managing director who is able to move things on for the next 10 years. We are looking, but we just haven’t found the right person yet.”