Regulators ‘not willing’ to sort INBS out over sale hopes, Neary says 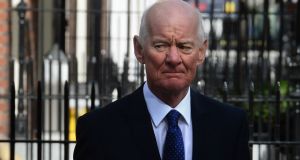 Patrick Neary said he had advised Ifsra’s board in February 2008 that he intended “to deal quite strongly around” corporate governance and controls issues at INBS.

Patrick Neary, the former chief executive of the now-defunct Irish Financial Services Regulatory Authority (Ifsra), told an inquiry into Irish Nationwide Building Society that the authority’s board was not willing to tackle a series of problems at the company for fear of upsetting its planned sale.

“I had the sense that the authority would not be willing to engage in any high-profile action at that stage,” Mr Neary told the inquiry into alleged regulatory breaches at the society between August 2004 and September 2008, when he was asked if regulators were delaying action to facilitate an INBS disposal.

Mr Neary said he had advised Ifsra’s board – which he referred to as “the authority” – in February 2008 that it was his intention “to deal quite strongly around” corporate governance and controls issues at INBS, but that he was cautioned about taking any actions that would cause concerns about the “standing” of the society.

Mr Neary appeared on Tuesday as the 20th witness to the inquiry into whether four former executives at the failed lender had participated in the commissioning of seven regulatory breaches during the period under investigation. The first phase of public hearings, which began last December, is concerned with whether INBS’s credit committee performed its required functions.

Responding to questions from Brian O’Moore SC, of the team of legal practitioners assisting the inquiry, Mr Neary said it was “disappointing” how his staff had failed to spot until late 2007 how INBS had wrongly informed regulators that the society’s credit committee was reviewing credit review reports on the performance of top borrowers’ loans. The inquiry has heard from a number of INBS witnesses who said the credit committee failed to live up to this requirement.

A document prepared internally at the regulatory authority in February 2008 highlighted how there was no “plan B” for the society in the event that a planned sale did not go ahead, warned of potential short-term liquidity issues, and highlighted ongoing concerns about corporate governance and controls at the lender.

While INBS had put itself up for sale in 2007, that fell through the following year as prospective buyers walked away in the midst of the unfurling credit crisis. INBS ended up being seized by the State at a cost of €5.4 billion to taxpayers.

However, the inquiry also heard that Mr Neary had questioned the rationale for the INBS inquiry last year when he replied to a series of questions from investigators in advance of public hearings. He noted on Tuesday that it has emerged since the crash that the other Irish banks had “serious weaknesses” in their credit stewardships.

“Do you think INBS has been singled out?” asked Mr O’Moore.

Mr Neary replied: “I have absolutely no idea.”