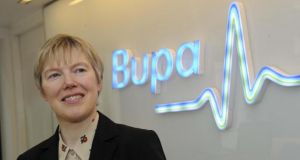 Bank of Ireland has appointed the chief excecutive of health insurer Bupa, Evelyn Bourke, and Ian Buchanan of private equity group Cerberus Capital to its board.

The bank said Ms Bourke would take up a position on the board of Bank of Ireland Group later this week.

Bank of Ireland said Mr Bourke had a strong track record in global executive management and extensive experience in financial services, risk and capital management, and mergers and acquisitions.

As part of her new role, she will also be appointed to the audit, nominations and governance committees of the bank’s board.

Ms Bourke joined Bupa as chief financial officer in 2012 from Friends Life Group, and was appointed chief executive in 2016.

“Evelyn has exemplary experience in global executive management and in financial services, and will bring this experience to her role on the board, court, and nomination and governance committee,” Bank of Ireland chairman Archie Kane said.

In addition to Ms Bourke, Bank of Ireland also announced Mr Buchanan, currently a director at Openwork - one of the largest financial advisor networks in the UK, would also be joining the board.

Formerly the chief information officer for Barclays bank, Mr Buchanan will also take a seat on the board’s risk committee as part of his appointment.

The bank said Mr Buchanan had extensive technology, digital, business transformation and customer operations experience gained through his work in a number of international retail, commercial and investment banks.

“Ian has held a number of very senior roles in international financial services, and will bring considerable experience of technology-based transformational change to his role on the board, court, and risk committee,” Mr Kane said.