Contingency planning for the unknown is hugely difficult, not to mention expensive 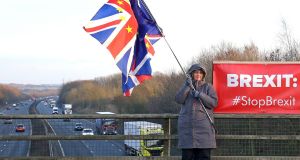 A protester campaigning against Brexit on a motorway bridge above the M20 near Ashford in Kent. Photograph: Gareth Fuller/PA Wire

The political world and the business world work on different timescales. Nowhere is this clearer than in relation to Brexit. There is now a real risk for businesses that the uncertainty about what type of Brexit is on the way will run close to the March 29th date on which the UK is due to leave the EU.

This may be fine for Europe’s leaders, who can go back to bed after an all-night summit. But for businesses, which need to prepare, it is hugely difficult and expensive, as contingency arrangements that may never be necessary are put in place, often at considerable cost.

This leaves three possibilities for business trying to plan their way through this. One is that, somehow, the House of Commons votes late in the day for the withdrawal agreement, perhaps helped by some amendments to the accompanying political declaration agreed by the EU.

The second is a delay – a postponement of article 50, perhaps by two or three months – with the hope that some way forward can be agreed. The third is a no-deal exit in March, or perhaps a few months later following an extension.

This level of uncertainty, and particularly the possibility of no deal, creates a near-impossible situation for businesses. This is severely complicated by the uncertainty of what exactly a no-deal exit would mean and the fact that official customs and other procedures would simply not be fully ready.

Even in policy terms, while there has been a general assumption that the UK would apply tariffs set down by the World Trade Organisation – as it would seem to be obliged to do under trade rules – there are rumours that it may not do so, at least initially.

How this all works out is critical for some key sectors, particularly the beef industry and also dairy and consumer foods. Pressure from businesses may, in the end, be one key factor leading to a deal being passed, or article 50 being extended. But as February rolls on and March approaches, it is, from the business viewpoint, a sorry mess.