CRH circles the wagons as activist snaps up stake 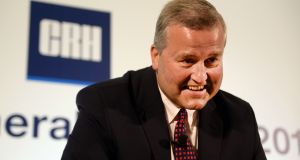 As activists go, Stockholm-based Cevian, which disclosed on Wednesday that it has built up a stake of less than 3 per cent in CRH, prides itself in having a soft-gloved approach.

“It’s not just going for one idea or being hostile or screaming and shouting through the media to get something,” Cevian co-founder Lars Forberg explained to Bloomberg TV last month of its style when investing in a company.

But Cevian, Europe’s largest activist fund, still likes to pack a punch. Even if it has to wait.

Take ThyssenKrupp. Five years after Cevian started to accumulate a stake in the German steel-to-elevators conglomerate, the Swedish firm, together with US hedge fund Elliott Management, succeeded last September in getting the industrial giant to do the unthinkable and agree to split itself in two.

Just before Christmas, another portfolio company, Swiss engineering group ABB agreed to sell its power grids business, bowing to a long-standing demand from Cevian, which had built up a 5.1 per cent holding more than three years earlier.

And, in late 2017, following more than a decade of patient involvement in trucks-to-construction group Volvo AB, the firm sold its remaining 8.2 per cent stake to Chinese car group Geely for €3.5 billion, netting a reported €2 billion profit.

CRH boss Albert Manifold knows he needs to be prepared for a fight. On the plus side, having generated €5 billion over the past five years selling off unwanted and underperforming businesses (even as it forked out €13 billion on acquisitions), Manifold can point to his sector-beating conversion of earnings into cash in recent years.

But its earnings margins currently trail many peers, and some analysts are questioning whether it can meet its own targets out to 2021.

Moreover, critics such as analysts in AllianceBernstein say that the group’s growth has stalled in recent years when you strip out what it bought through deals.

In an effort to boost shareholder value, CRH unveiled its first share buyback programme in a decade last April, committing to repurchasing €1 billion of its own stock, as it traded at a discount to businesses it ordinarily would be seeking to buy.

The buyback target is almost reached. But interestingly, CRH’s broker, Davy, suggested in a note on Wednesday that the buyback programme could be extended. The wagons are being circled.