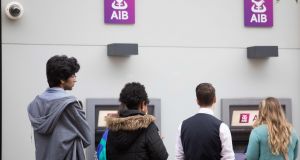 AIB has relaunched plans for the sale of a portfolio of mortgages. Photograph: Tom Honan

AIB has relaunched a planned sale of a portfolio of mortgages deeply in arrears after putting it on hold at the height of the Covid-19 crisis earlier in the year. Joe Brennan has details of the deal, which involves loans that had an original value of €1.3 billion.

Mortgages were in the news on Thursday too, when the Central Bank ruled out a temporary loosening of mortgage lending rules while the pandemic persists. Eoin Burke-Kennedy reports on what governor Gabriel Makhlouf had to say.

With a Brexit trade deal still elusive, Government ministers have stepped up their calls for businesses to immediately prepare for the UK’s departure from the EU customs union and single market. Simon Carswell has that story, while Naomi O’Leary reports from Brussels that the City of London is being told to set up shop in the EU or face disruption to their business.

Charlie Taylor brings news of directors at Irish IT services company Version 1 sharing a ¤16.5 million dividend last year. The payout came after the business posted pretax profits of €13.7 million on turnover of €128 million.

Mark Paul uses his Caveat column this week to ask questions about the attitude of public health authorities to alcohol, wondering to what extent this informs their recommendations on measures to combat Covid-19.

Back with banking, Joe Brennan takes an in-depth look at Ulster Bank, which is known to be considering its future in the State. He considers what brought the bank to this position and how things might play out for the lender.

John FitzGerald also has banks on his mind, specifically the future shape of the sector and the chances of developing an integrated EU banking system that would lead to lower costs for Irish customers.

With Christmas traditionally a time for people to rethink their career, Olive Keogh asks how the jobs market might look next year. The bottom line is that it might not be as bad as you think, particularly if you’re lucky enough to work in the right sectors.

This week’s Wild Goose is New York-based Rebecca Kelly, who tells Joanne Hunt about her life as a “tech evangelist” for Kx, a division of Newry tech company First Derivatives. Kelly notes that having a degree in maths “has been a real door-opener”.

10 Irish whiskey sales near milestone of 12m cases a year