Wild Geese: Rebecca Kelly’s maths degree opened many doors, including one to NYC 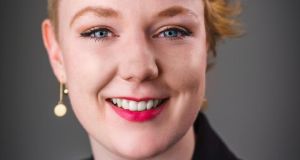 The tech “evangelist” from Kilkenny targeted the software sector without any coding knowledge.

“Having a degree in maths has been a real door-opener,” says Rebecca Kelly. The New York-based Kilkenny native was this month named tech evangelist of the year at the annual Women in IT Summit awards. The accolade adds up.

She was hired as a “tech evangelist” for Kx, a division of Newry tech company First Derivatives. Her win singled her out among her peers for her “technical credibility, proactivity and passion” and for being a champion of change for women in technology.

The journey began with “great maths teachers” at Castlecomer Community School, she says. “Maths just made sense to me. You knew if you were right or wrong. I liked the certainty. Even if you were wrong, it was definitive.”

She finished her degree at Trinity College with no specific career in mind. Graduate milk-round interviews that she did “for practice” bagged her an audit role at KPMG. “People just trust maths as a subject,” she says. “There is a perception that it’s really difficult and people think, if you can do that, you can do other things. There is an implicit trust that you are capable of thinking logically and reasoning things out.”

She enjoyed the company, just not auditing. “I felt like I was checking people’s work and I wondered, well, where’s the work I can point at and say, ‘Look what I’ve done’?”

She decided on a pivot towards coding, the slight hiccup being she didn’t know any coding. That wasn’t a barrier to joining First Derivatives, however. London-listed, the company provides trading and risk-management software systems and consulting services to the capital markets industry. It completed a $53.8 million acquisition of Kx Systems last year.

“Kx is not quite as prolific as other languages. There isn’t an expectation that you already know it, so that was my in.” Her first stint with the company was on a Kx project in Sydney.

“I had the life,” she recalls. Working on a surveillance platform to help the Australian Securities and Investments Commission look for market abuse and fraud was rewarding and it gave her a bird’s-eye view of the market.

She moved to London with the company but left to complete a master’s degree in machine learning at the University of Edinburgh. A deal struck with her partner allowed him to pick the couple’s next move.

“He had an opportunity to work in New York with Kx and I thought, well, I’ll figure something out.” A call from the company’s chief technology officer, inviting her back to head up a new evangelism function in the city, led to her current role.

“I felt it would be exciting to lead a new function, it was too good to pass up,” says Kelly. The appeal for her is the freedom to define what she needs to do and go after it.

The company’s expertise lies in harnessing big data in real time. “We deal with huge amounts of data coming our way quickly, that’s where we excel,” she says. “Streaming analytics is the idea that you have this massive hosepipe of data coming at you very quickly and you can take actions based on it in real time.”

So what does an evangelist do? “My motto is that I’m here to help really,” she says. She spends her time between customers and the developer community. “On the client side, I go around and talk to them and ask: ‘How are you finding it, what do you like, what would you like to see?’”

Going virtual due to Covid-19 has had advantages. “Now we are able to offer the same event to everyone. We’ve opened the door in a way. Geography isn’t a concern. People are signing up from the middle of America. They were never going to get in a car and drive to New York for a workshop.”

Being able to present virtually or pre-record a presentation means developers with stage fright can share their knowledge with ease.

A surge in women in IT meet-up groups in New York has created spaces for peers to feel a sense of community, she says. Of gender balance, her experience is that she sees more men in some of the bigger financial institutions with which she works with greater balance of genders in the tech industry. “Unless it’s just been me by myself in the room, I’ve never been the only girl.”

With a number of tech multinationals in Ireland, she says the best place to start for those wanting to work overseas is at home.

“If you prove your value and get on well, most places are happy to accommodate a transfer.” Be prepared for some cultural differences, of course. Average work leave in the US is 10 days, which sometimes covers sick days too.

“There is a much greater expectation of how available you are for work. Back home, there is a bit of a healthier approach and people are quite respectful of that.”

Where you went to college matters more too and it’s not just at work. “I know people who are on some of the dating apps here and they will look at where the person went to university and that will factor into their swiping,” she says jokingly.

Everybody in New York loved Normal People, she says of the hit TV series partly shot around the picturesque front square of her alma mater.

“When there were all the nice shots, I said: ‘That was my university but I was way down the back. I walked past all of that.’” She still has links with the place and is excited by a new student developers’ society being formed. Students thinking of moving into coding should just get hands-on and do it, she says. “Get involved. Don’t worry too much about the future. Make plans but don’t hold on to them too seriously. Be open to opportunities.”