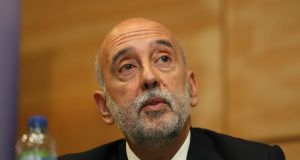 Governor of the Central Bank of Ireland Gabriel Makhlouf said the imbalance between demand and supply is likely to persits for an extended period. Photograph: Nick Bradshaw

The Central Bank has ruled out a temporary loosening of mortgage lending rules during the coronavirus crisis while warning that the imbalance between housing demand and supply is likely to persist “for an extended period”.

Governor Gabriel Makhlouf said borrowing limits continued to meet their objectives of strengthening bank and borrower resilience and would remain unchanged for 2021.

While there was some tightening in lending criteria by banks earlier in the year, this was largely a reflection of the impact of health restrictions on activity in the housing market, he said.

Publishing the Central Bank’s latest Financial Stability Review, Mr Makhlouf said housing transactions and mortgage activity had recovered faster than expected in the summer, particularly in the first-time buyer segment of the market, but still had some way to go to reach pre-pandemic levels.

In its review, the regulator said the mortgage rules, which cap lending to three and a half times income, had enhanced the ability of borrowers to withstand shocks.

It noted that mortgages issued in the 2010s were much less likely to be on a payment break than those issued in the credit boom of the 2000s.

Vigilance would have to be maintained, however, as the combination of strong demand, risks to housing supply and additional debt could create “pro-cyclical dynamics between credit and house prices”.

As a result of the pandemic, new mortgage lending, issued under the current rules, amounted to €5.8 billion in the year to the end of October, an 18 per cent decline on 2019, it said.

Mr Makhlouf also warned housing supply was likely to remain below pre-pandemic levels, “and indeed below estimates of medium-term demand, for an extended period”.

“As a community, we continue to grapple with fundamental challenges of sustainability, affordability and delivery of appropriate housing supply to meet the needs of home-owners and renters across the private and social domains,” he said.

In its review, the Central Bank said the speed and depth of the Covid-19 shock experienced since March are without precedent, while noting the outlook was subject to significant uncertainty around the path for the virus and vaccine, the potential need for repeated public health measures that severely hamper economic activity.

By the end of October, there were 29,000 accounts, mortgage and non-mortgage, on loan breaks related to the pandemic, it said, reflecting about €6 billion worth of borrowings.

The Central Bank warned that a disruptive Brexit could exacerbate the effects of the pandemic.

Mr Makhlouf said the delay in clarifying the ultimate trading relationship between the EU and the UK “compounds the near-term challenges, adding to uncertainty, and limiting time available to reduce inevitable frictions”.

“Let me be clear, having a comprehensive trade deal for goods would be better than not having one, but it remains only the better of two unfortunate outcomes, and implementation presents significant challenges,” he said.

The Central Bank cautioned that a key risk to global financial conditions was what it described as a “growing disconnect between certain financial market valuations and the real economy”, most notably in the US where consumer confidence metrics and equity market valuations have diverged.

It said markets were pricing in a “V-shaped” rebound in activity, supported by better-than-expected macroeconomic data.

As a result market volatility measures have dropped sharply in recent months but it warned these measures do not appear to fully capture the heightened levels of economic policy uncertainty”.