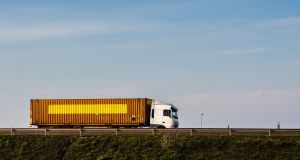 From the start of next year, Irish businesses will have to file customs declarations to be able to continue trading with Britain and to ensure their goods are permitted on in-bound ferries. Photograph: Geert Vanden Wijngaert/Bloomberg

Government ministers have intensified calls for businesses that have not yet prepared for Brexit to take immediate action as a new survey found significant numbers were still not ready.

At just 35 days until the UK’s departure from the EU customs union and single market comes into effect, Minister for Agriculture Charlie McConalogue expressed concern that a significant number of agri-food, forestry and fisheries firms who have traded with the UK in the past two years were still not ready for the January 1st deadline and the incoming customs arrangements.

Mr McConalogue said that these companies had not yet taken the initial step in being prepared for Brexit by registering for an economic operators’ registration and identification (EORI) number.

“Without this first step these companies will not be able to trade with Great Britain in five weeks’ time,” he said.

From the start of next year, Irish businesses will have to file customs declarations to be able to continue trading with Britain and to ensure their goods are permitted on in-bound ferries.

New customs arrangements on trade between the Republic and Britain will come into effect on January 1st, regardless of whether the ongoing EU-UK negotiations yield a trade deal.

A survey conducted for Enterprise Ireland found that half of 600 companies contacted have yet to decide who will manage documentation and procedures when their goods arrive in Britain.

More than 30 per cent have yet to decide if customs procedures will be managed in-house or through a broker, according to the market research firm IHS Markit and analysis of companies who have completed Enterprise Ireland’s tool, the Brexit Readiness Checker.

Some 44 per cent have not yet decided how they will pay customs charges.

More than 50 per cent have yet to detainer the potential tariff on their goods. Unlike customs, a potential EU-UK trade deal could resolve remove the need for tariffs and quotas on traded goods.

Tánaiste and Minister for Enterprise, Trade and Employment Leo Varadkar, reacting to the survey, appealed to businesses to get ready and to seek help under the State’s Brexit supports.

“This year has been devastating for many business owners. It would be understandable if Brexit was the last thing on their minds,” he said.

“However, Britain leaving the customs union and single market at the end of this year will bring major changes. There is a real risk of delays and loss of income, which would be really damaging for any business.”

Meanwhile, the Banking & Payments Federation Ireland has reminded small and medium-sized companies can reduce the burden of customs formalities on goods they transport across the UK “landbridge” by using the customs transit procedure.

To use the procedure, companies or the transport companies they use to ship their goods must have a “Revenue Comprehensive Guarantee” that must be backed by a financial guarantee from a bank.