Brian Conlon’s legacy will live on at First Derivatives

Cantillon: Technology pioneer was founder and CEO of First Derivatives in the North 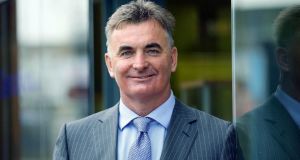 Brian Conlon: His drive, ambition and determination inspired all who had the privilege to work with him.

On Sunday, Brian Conlon, one of Ireland’s leading entrepreneurs, died at just 53, following a battle with cancer.

A technology pioneer, Conlon was a leader in the fintech space long before anyone had thought up the term, and was the founder and chief executive of First Derivatives in Northern Ireland.

The business was established in his mother’s spare bedroom in 1996, and Conlon transformed it into a listed company employing more than 2,000 people with an estimated valuation of at least £800 million (€878 million). He based the company in Newry, an area scarred by the Troubles.

Having listed in 2002, it is one of just two stock market companies in Northern Ireland, along with Belfast-based Kainos, and currently trades in London and Dublin.

Conlon was also an accomplished GAA footballer, playing for his native Down in the mid-1980s until his career was cut short by injury.

In 2010, he won the EY Entrepreneur of the Year (EOY) Award, representing Ireland the following year at the world awards in Monaco. He was hugely popular among the large EOY alumni community here and will be missed at their regular events and the annual chief executive retreat.

After being diagnosed with cancer in May, Conlon opted to continue working during his treatment, a signal of his determination and his commitment to the company.

First Derivatives now has the difficult task of finding a successor to fill the considerable void left by Conlon’s death. The company has appointed chairman Seamus Keating as executive chairman, and has initiated a process to identify a successor.

Keating paid this tribute to Conlon: “Brian built a world-class business in First Derivatives. His drive, ambition and determination inspired all who had the privilege to work with him. This news is a profound shock to all of us.”

Having started out providing trading and risk-management software systems and consulting services to many of the world’s top investment banks, brokers and hedge funds, First Derivatives has expanded into several other sectors, including manufacturing, digital marketing, retail, gaming, telecoms, automotive and space.