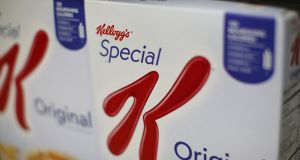 Kellogg, which makes Pringles, Pop-Tarts, Eggo Waffles and a wide range of breakfast cereals including Corn Flakes, has been spending more on advertising and developing new products to suit changing consumer preferences for healthier food and smaller portions.

Net sales from North America, which accounts for nearly two-thirds of Kellogg’s revenue, rose 1 per cent in the second quarter to June 29th. The North America unit has not grown sales by this much since the first quarter of 2013, according to J.P.Morgan analyst Ken Goldman.