The terms value Just Eat at around €5.1 bn, based on Takeaway’s Friday market close 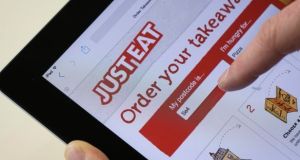 Amsterdam-based Takeaway. com and British rival Just Eat have finalised the terms of their deal to create a global food delivery company that can rival Uber Eats as the largest outside China.

The group, to be called Just Eat Takeaway.com, will be a market leader in Britain, Germany, the Netherlands and Canada.

The companies said on Monday they had backed the deal as outlined on July 29, with Just Eat shareholders receiving 0.09744 new Takeaway.com shares for each of their shares.

The terms value Just Eat at around £4.7 billion (€5.1 billion), based on Takeaway’s price at Friday’s market close.

Takeaway.com’s shares have slipped around 8 per cent since the deal was announced last week, trading at €76.70 on Monday morning.

“The board believes that this is a compelling offer for Just Eat shareholders which will create a global leader in a dynamic and rapidly growing sector,” the British firm’s chairman, Mike Evans, said.

“Together we will have the scale to address the huge opportunities in the delivery market, as ordering food moves to becoming an everyday convenience”, he told reporters.

Scale is all-important in the fast-growing $100 billion market as global rivals such as Amazon-backed Deliveroo and Uber Eats scramble to offer consumers the biggest choice.

“There is unprecedented competition in this global market, with lots of new parties”, Takeaway chief executive Jitse Groen, who will lead the merged company, said.

“Bringing these two together means we can pool the profits from both, to allocate capital efficiently to 23 countries.”

The companies said their merger was expected to lead to €20 million in cost savings after four years, with around half of that amount expected in the first year.

The deal is set to close by the end of 2019, after which Just Eat Takeaway.com shares will be listed in London, while Takeaway’s current listing in Amsterdam will disappear after a year.

Just Eat, which offers access to more than 2,000 restaurants in the Republic, made almost half of its staff in Dublin redundant earlier this year as the group centralised a number of functions.