Is US interest rate cut a once-off or just the start? 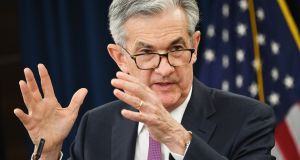 Federal Reserve chairman Jerome Powell: he has had a difficult relationship with the man who appointed him Donald Trump. Photograph: Getty Images

The decision by the US Federal Reserve board to cut its key interest rate by quarter of a point underlines that the extraordinary era of low interest rates is set to go on for a while yet.

The Fed has more scope than the European Central Bank as it has already increased its interest rates after the crisis, while the key ECB rates remains stuck at zero per cent.

Still, the key Fed funds rate had only reached a level of 2.25 to 2.5 per cent ( the Fed sets a range for this rate). If that is to prove the top of the US interest rate cycle it represents a very low peak. The top of the last cycle, in 2007, saw the Fed funds rate top 5 per cent.

The Fed chairman, Jay Powell, has had a difficult relationship with the man who appointed him, Donald Trump. The president has talked up the economy, while also calling for interest rates to be cut. With weakness in inflation and wage data and parts of manufacturing, the Fed has decided to move despite unemployment being at historic lows. The poor outlook for the global economy is one factor behind its decision

The interesting question is whether further US rate cuts will now follow or whether this is a “one and done” strategy which will see the Fed sit on its hands for some time.

This will all depend on the economic data. The latest news of further difficulties in trade talks between the US and China show that more danger lies ahead to the growth outlook. Further tensions between Trump and Powell may lie ahead.

For Ireland – and for Irish borrowers – the move is further confirmation that the era of super-low interest rates is here to stay for a good while yet. The ECB may well reduce at least one of its rates in September – probably the deposit rate it pays banks who leave cash with it.

This is good news for borrowers, including the State as it refinances debt. But the low interest rate era also shows worrying concern about slow growth and very low inflation in the world’s largest economies more than a decade after the crash.